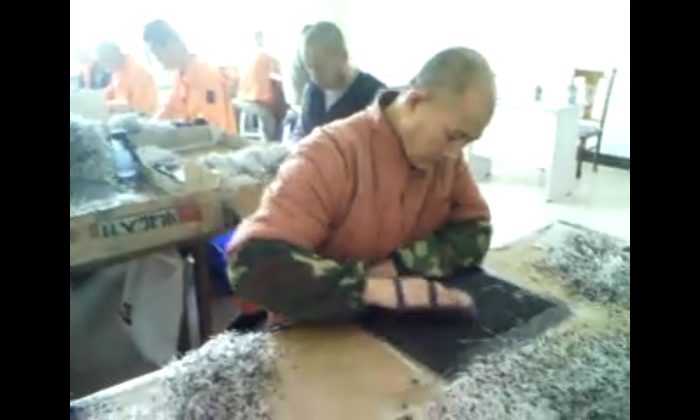 Democrats on the House Energy and Commerce Committee defeated a Republican amendment on Sept. 14 that would have barred the use of federal funds to purchase any critical mineral needed for renewable energy products, such as electric vehicle (EV) batteries, that was mined with forced labor.

Introduced on the second day of the panel’s markup of President Joe Biden’s $3.5 trillion “Build Back Better” spending program, the amendment by Rep. Tim Walberg (R-Mich.) would have made it illegal to import or pay for products made with critical minerals mined by or assembled with forced labor.

The most frequently mentioned country during the ensuing debate was China, because of its use of forced labor by millions of Muslim Uyghurs in the production of a long list of consumer products that are exported to the United States.

Also frequently mentioned was the Congo, which has most of the world’s cobalt, which is required for batteries used in EVs that the Biden plan seeks to encourage U.S. consumers to buy instead of traditional internal combustion-powered cars and trucks.

China controls most of the cobalt mining in the Congo, as well as that of lithium, which is also required for EV batteries. Approval of the amendment would have erected a major obstacle to achieving Biden’s goal of half of all U.S. new vehicle purchases to be of EVs by 2030.

Debate on the amendment—which was defeated on a party-line vote of 32–26—became heated as Republicans decried African children being forced to dig cobalt with their bare hands and Uyghurs held in Chinese labor camps. Democrats replied that the United States already has such laws and thus doesn’t need another one with the passage of the Walberg amendment.

“My Democratic friends have included hundreds of billions of dollars in order to transform our [electric] grid and make us reliant on renewables and electric vehicles,” Walberg said in defending his proposal.

“Not only will this lead to trillions more in taxes and debt, drive up [electricity and energy] rates, and undermine wages, it will further entrench our nation in total and complete reliance on communist China.”

“This is not just a national security issue, it’s also a human rights imperative, and this is where it goes to our soul. If we’re going to build our domestic renewable energy industry, we need to have an honest conversation about where we are sourcing these materials.”

Walberg noted that China detains millions of mostly Muslim Uyghurs in more than 100 forced labor camps in that country’s coal-rich northeastern section. There is an estimated 21 million square feet of factory space in which the Uyghurs are forced to work, often making products for U.S. firms that export them back to this country.

“So I ask my colleagues, where are the critical minerals required for carbon-free electricity by 2035 going to come from? Other than vague promises, we’ve seen very little action by Democrats and the Biden administration to ensure domestic sourcing and mining of raw materials required to make the batteries that power EVs,” Walberg added.

He noted that a similar amendment was adopted last week on a bipartisan vote by the House Science, Space, and Technology Committee.

In response, Rep. Kathy Castor (D-Fla.) said, “The Biden administration has already taken crucial steps to halt the import of critical minerals from regions that rely on forced labor and lax environmental protections.”

The administration’s actions send “a clear, decisive message that the United States does not tolerate forced labor” and that importing critical minerals “produced using forced labor may constitute a violation of U.S. law.”

Walberg’s amendment “ignores the important efforts that are already underway to end forced labor and is a distraction from the legislation we’re here to consider,” Castor said.

Walberg said he was encouraged that the Biden administration has taken some actions on the issue, and then asked Castor, “What would be the problem with the Congress taking the same steps by putting it into this bill that you intend to pass and putting the sense of Congress, as it were, lining up with the administration if that’s what they truly believe and work for?”

Rep. Jan Schakowsky (D-Ill.) told the committee that U.S. law since 1930 has barred the importation of products made using forced labor. “We have these laws. They are on the books. Perhaps they need to be more enforced, and so this amendment is really not necessary.”