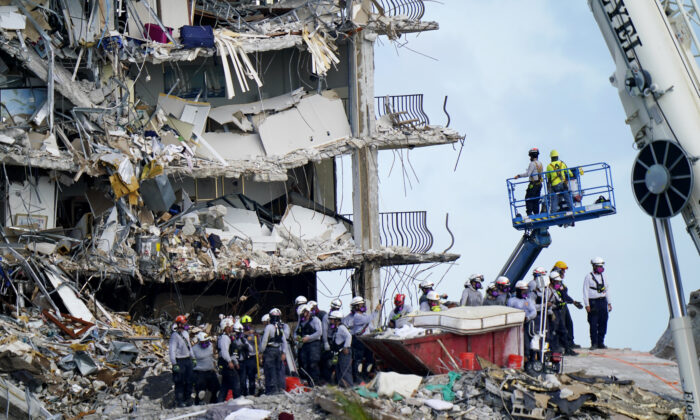 Prosecutors in Florida will ask a grand jury to investigate the collapse of the Champlain Towers South, which has left at least 12 people dead and scores more missing.

Miami-Dade County Mayor Daniella Levine Cava told reporters at a press briefing that she backs a probe by State Attorney Katherine Fernandez Rundle that would examine factors that led to Thursday’s collapse of the 12-story Champlain Towers South building in Surfside, where at least a dozen people died and 149 more remain missing.

“I have pledged my full cooperation as she moves forward,” Cava said. “I will do—and my team will do—everything possible to aid them in their efforts to continue that investigation.”

Rundle said she would bring the matter before grand jurors soon.

“I am going to urge them to take a look at it,” she told the Miami Herald. “Whether they do or not, it’s completely their decision.”

Rundle added in a statement that she she will ask the grand jury to investigate “what steps we can take to safeguard our residents without jeopardizing any scientific, public safety, or potential criminal investigations.”

“Our hearts and prayers are with every victim, family member, friend and co-worker who has been affected by this tragedy,” Rundle said. “As your state attorney, I assure you that my attorneys, staff, and I are dedicated to ensuring that those who were lost will never be forgotten.”

Grand juries in South Florida have examined other large-scale disasters, such as the 2018 collapse of a pedestrian bridge at Florida International University, which killed six people. That investigation is ongoing.

Criminal charges in such matters are possible, such as the third-degree felony murder and manslaughter charges brought in the 1996 accidental crash of ValuJet 592 in the Everglades that killed 110 people.

Cava said Tuesday that search-and-rescue efforts led to the discovery of the remains of the 12th casualty in the disaster.

Investigators have yet to determine what caused a large section of the 40-year-old building to collapse in the early hours of Thursday morning. However, in 2018 it was flagged by an engineering firm for “major structural damage.”

The county requires buildings to undergo recertification starting at the 40-year mark and every 10 years thereafter. The Champlain Towers South was built in 1981.

The Miami-Dade government said in a statement over the weekend that its Department of Regulatory and Economic Resources “will conduct an audit of residential properties of five stories or higher at the recertification point—40 years or older—that have not completed the process.”

“The audit will start immediately and will be completed within 30 days,” the Miami-Dade government added in the statement. “For any buildings located within municipalities, the Mayor urges cities to swiftly conduct their own similar audits. The County will work closely with municipalities and provide any technical assistance necessary to conduct these audits.”

A list released late on Monday by the Miami-Dade government, first reported by the Miami Herald, shows that 24 Miami-Dade apartment complexes, including two owned by the county, were found to have unsafe structural violations following the emergency audit.

According to the list, the two buildings owned by the county include the Little River Plaza, an 86-unit public housing complex that was built in 1970, and Ward Tower 1, a complex that was constructed around the same time.

The audit found that Little River Plaza was cited in 2015 for needing lighting improvements in its parking lot, while Ward Tower 1 was hit with a recertification violation in March, according to the Herald.

Other details were not provided. The Epoch Times has contacted the Miami-Dade government for comment.

Local government officials claimed that building code issues have cropped up due to a lack of federal funding. Michael Liu, the housing director for the county, told the newspaper that the area is about $10 million short, forcing his agency “to make difficult choices based on severity and threats to health and safety.”