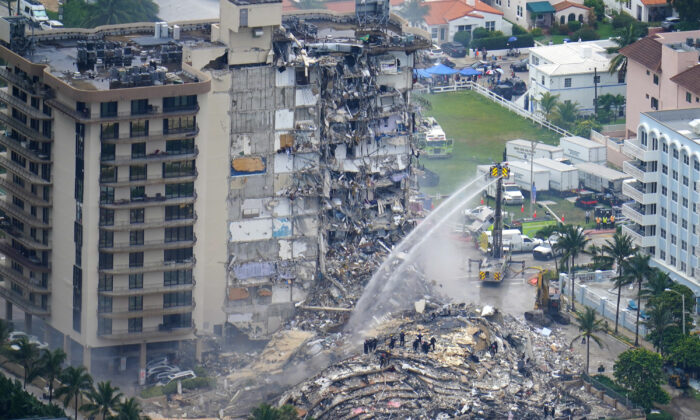 Rescue workers work in the rubble at the Champlain Towers South condo tower is seen in Surfside, Fla., on June 25, 2021. (Gerald Herbert/AP Photo)
US News

The death toll from the collapse of a Miami-area condominium tower has risen to nine, Miami-Dade Mayor Daniella Levine Cava said June 27.

More than 150 people remain missing following the collapse on June 24.

Meanwhile, officials released a report from 2018 that included a warning from an engineer about “major structural damage” and the tower needing $9 million in repairs.

Now, a nine-page report from structural engineering firm Morabito Consultants in October 2018 has been released (pdf) by the City of Surfside, warning about the condition of the concrete structure.

“Abundant cracking and spalling of varying degrees was observed in the concrete columns, beams, and walls. Several sizable spalls were noted in both the topside of the entrance drive ramp and underside of the pool/entrance drive/planter slabs, which included instances with exposed, deteriorating rebar,” states the report, which was released over the weekend. “Though some of this damage is minor, most of the concrete deterioration needs to be repaired in a timely fashion. All cracking and spalling located in the parking garage shall be repaired in accordance with the recommendations of [International Concrete Repair Institute].”

Authorities said they harbored hope that the more than 150 people who are unaccounted for may still be alive, as firefighters on June 26 were able to sift through the smoldering rubble of Champlain Towers South.

Meanwhile, Florida Gov. Ron DeSantis said over the weekend that he had spoken to Surfside Mayor Charles Burkett and was considering evaluating the nearby Champlain Towers North, regarded as a sister building to Champlain Towers South.

That sister building, the governor told reporters, “was built at the same time and with the same designer.” Previously, DeSantis made an emergency declaration over the collapse, which was then authorized by President Joe Biden.

In another interview, Burkett told CNN that he has recommended that the sister building be evacuated pending a thorough structural investigation.

“Because I don’t think people need to live with the possibility or the thought that their” building may collapse, Burkett said.

According to the Morabito Consultants report, the release of the 2018 cost estimate followed the earlier publication of another document from the firm showing the ground floor pool deck of the building was resting on a concrete slab that had “major structural damage” and needed to be extensively repaired. That report also uncovered “abundant cracking and spalling” of concrete columns, beams, and walls in the parking garage.

The report didn’t warn of any imminent danger posed by the damage, and it’s unclear if any of the damage observed was responsible for the collapse of Champlain Towers South.

A resident of the building sued the owners of the Champlain Towers and alleged the outer walls weren’t being maintained. Matilde Fainstein filed for damages in the Miami-Dade Circuit Court and alleged the owners “failed to repair or negligently repaired the common elements and the outside walls of the building,” Business Insider reported last week.

On June 25, what appears to be the first lawsuit related to last week’s partial collapse was filed. The Brad Sohn Law Firm confirmed it’s suing the Champlain Towers on behalf of Manuel Drezner and others, seeking $5 million in damages.

“According to public statements made by Defendant’s attorney Ken Direktor, ‘repair needs had been identified’ with regard to certain structural issues but had not been implemented; one of the most breathtakingly frightening tragedies in the history of South Florida followed,” the complaint states.

The owners of the Champlain Towers didn’t respond to a request for comment by press time.