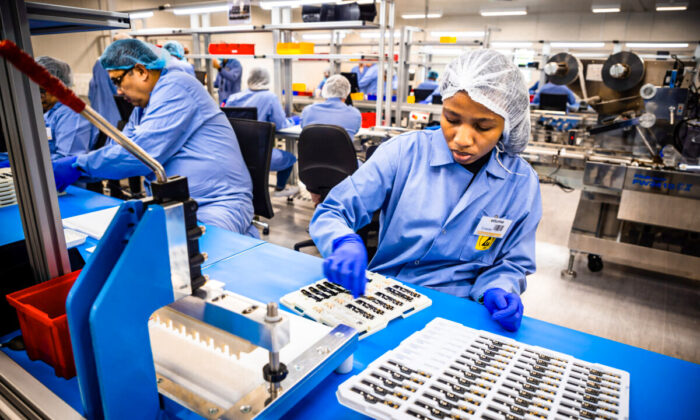 The U.S. Food and Drug Administration (FDA) confirmed Thursday it is recalling some 2 million Ellume at-home COVID-19 testing because they can produce “false positives” due to a manufacturing defect.

The firm first informed the federal regulatory agency about the defect in some lots in October. But on Wednesday, the FDA said it identified additional lots that were affected by the manufacturing defect, made between Feb. 24, 2021, and Aug. 11, 2021.

To date, about 35 false positives from the COVID-19 tests were reported to the FDA. No deaths have been reported related to the test, according to the agency.

A “false positive” indicates that an individual has contracted the CCP (Chinese Communist Party) virus, which causes COVID-19, when they actually do not.

The FDA noted that false positives could lead to “delayed diagnosis or treatment for the actual cause of the person’s illness, which could be another life-threatening disease that is not COVID-19” or receiving “unnecessary COVID-19 treatment from a health care provider,” which may “result in side effects.”

Another problem, the FDA noted, is isolation, including monitoring household or close contacts for symptoms, limiting contact with family or friends, and missing school or work.”

Underscoring the severity of the issue, the FDA said it “identified this as a Class I recall, the most serious type of recall … use of these tests may cause serious adverse health consequences or death.”

The antigen test detects proteins from the CCP virus from a nasal sample, and it’s available without a prescription for use by people aged 2 years and older. It also comes with an analyzer that connects with a smartphone app to show users to perform the test and understand the test results.

Ellume has recalled 2,212,335 tests in the United States to date. Earlier this year, the Australia-based firm announced it had about 200,000 of its tests.

The Biden administration had signed a $231 million deal with Ellume, which received approval to produce its tests under the Trump administration last year.

In October, Dr. Sean Parsons, Ellume’s chief executive, announced that the firm had created more safeguards to stop the problem from occurring again.

“I’m very sorry that this has happened,” he told the New York Times at the time. “We’re all about chasing accuracy, and to have these false positives is disappointing.”

And a spokesperson said that the “root cause” of the issue was identified. The company is already shipping new products inside the United States, the spokesperson added to the NY Times.