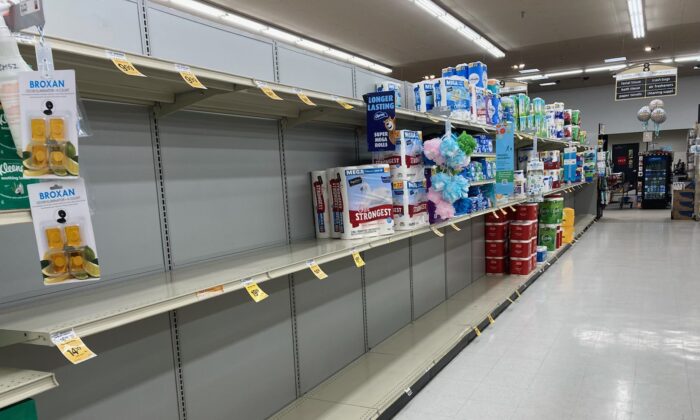 Empty supermarket shelves at Safeway in Williams, Arizona, in late September were partly due to delayed shipments, according to a store employee. (Allan Stein/The Epoch Times)
Economy

Amid a supply chain crunch and rising inflation, several economists have argued that recent drops in consumer sentiment suggest a recession is looming.

David Blanchflower of Dartmouth College and Alex Bryson of University College London, in a report, pointed to signals before the 2008 recession. They noted that the “wisdom of crowds,” rather than experts or intellectuals, is generally superior in making such predictions.

“Consumer expectations indices from both The Conference Board and the University of Michigan predict economic downturns up to 18 months in advance in the United States, both at national and at state-level,” they wrote in the paper. “All the recessions since the 1980s have been predicted by at least 10 and sometimes many more point drops in these indices.”

Over the past six months, there are “clear downward movements in consumer expectations” that “would suggest the economy in the United States is entering recession now (Autumn 2021)—even though employment and wage growth figures suggest otherwise.”

Throughout 2021, the unemployment rate has continued to fall, but the two instead pointed to other worrying trends in the United States: shortages of goods and services, rising inflation, and a stagnant labor force participation rate. Meanwhile, the White House and other administration officials had warned that if the U.S. defaults on its debt—which could come in December after a short-term deal was passed in Congress—it would lead to a recession.

“It seems to us that there is every likelihood that the United States is entered recession at the end of 2021,” Blanchflower, a former Bank of England member, and Bryson wrote. “The most compelling evidence is from the Conference Board expectations data for the eight biggest states.”

Bryson and Branchflower both noted that declines in consumer sentiment are generally coupled with higher joblessness ratings and falling employment rates. Stimulus packages, including the $2.2 trillion CARES Act passed last year, could be propping up the labor market.

“The answer appears to lie in the exceptional nature of the COVID-induced shock to the economy,” the two said. “It has been both an economic shock and a health shock, and one with the potential to derail the economy again over the coming months.”

In spite of improvements to the labor market, “declining consumer expectations about the future of the economy are linked to COVID-related fears and anxieties,” their report said. “This is borne out by the survey by The Conference Board discussed above indicating a recent rise in the percent of workers—and especially women—worried about returning to the workplace for fear of contracting COVID-19, a substantial increase from June 2021 when only 24 percent expressed this concern.”