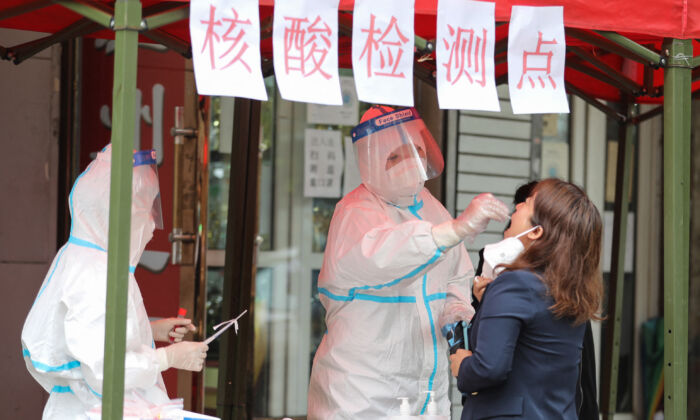 A resident undergoes a nucleic acid test for COVID-19 in Harbin, Heilongjiang Province, China, on Sept. 22, 2021. (STR/AFP via Getty Images)
INSIDE CHINA

Just days before the ruling Chinese Communist Party (CCP)’s top conference, COVID-19 has spread to more than a dozen provinces in China.

In a southern city, there were reports of people panic-buying, while in Heilongjiang, a northeastern province, authorities forced the lockdown of residential neighborhoods.

The communist regime’s National Health Commission reported 93 locally transmitted cases in one day on Nov. 3, the highest it reported this year. With the largest number of cases, Heihe city in Heilongjiang reported 35 cases, and 51 local communities have been shut down.

This comes as the ruling CCP’s conclave—the Sixth Plenary Session—is set to be held in Beijing from Nov. 8 to 11.

Heihe city held an epidemic press conference on Nov. 2, saying that after the COVID-19 outbreak on Oct. 27, traffic checkpoints were set up on eight roads in and out of the city to strictly control people and vehicles leaving the local area. All hotels used as quarantine sites would be staffed by the epidemic control team and would be under 24/7 lockdown. For people quarantined at home, the authorities sealed their doors or installed door sensors at their houses and apartments to prevent them from going out. Since Oct. 27, six rounds of nucleic acid tests have been carried out for all city residents.

Meanwhile, reports in the southern city of Changzhou, in Jiangsu Province, said residents have been panic-buying food and supplies, emptying out local supermarkets, after a report of local COVID-19 cases.

The Epoch Times has obtained a video showing residents panic-buying at a supermarket in Changzhou.

A shop clerk at RT-Mart Supermarket in the Wujin district of Changzhou city told the Chinese language Epoch Times that the panic-buying began on the evening of Nov. 2, and all the supermarkets were emptied out by the next morning.

“Now there is not much rice left in the supermarket, and the vegetable section has been emptied,” the store clerk, Liu (a pseudonym), said. “The supermarket has placed an urgent [purchase] order, but it’s hard to tell if it will be supplied in time.”

On Nov. 3, Changzhou city officially reported three new locally transmitted cases. The staff of the Market Operation and Consumption Promotion Office of the Changzhou Municipal Bureau of Commerce told local media that the panic-buying in the city was mainly because of the COVID-19 outbreak, and the fear of food and supply shortage in the winter caused by a “Notice on Doing a Good Job in Maintaining Supply and Stabilizing Prices of Vegetables and Other Daily Necessities in the Market this Winter and Spring,” issued by the Ministry of Commerce.

Since the Chinese communist regime has consistently covered up the real situation of the COVID-19 epidemic in China since the start of the outbreak in Wuhan, official statistics are unlikely to reflect the real number of cases and deaths.

Fang Xiao and Hong Ning contributed to the report.