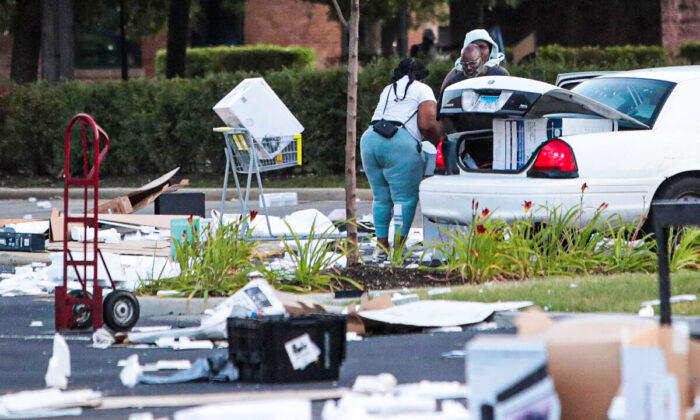 People load merchandise into a car near a looted Best Buystore after parts of the city had widespread looting and vandalism in Chicago on Aug. 10, 2020. Police made several arrests during the night of unrest and recovered at least one firearm. (Scott Olson/Getty Images)
Companies

Best Buy CEO Corie Barry said Tuesday that theft is a growing problem in the company’s stores, and the aggressive behavior displayed by shoplifters is “traumatizing” staff members, which has led to retention issues in the otherwise tight labor market.

Barry told Wall Street analysts on a conference call to discuss earnings that criminals often carry in weapons like guns or crowbars and threaten employees and customers. Consumer electronics have reported an increase in organized crime, according to the CEO.

The company has begun locking up products and hiring more security when possible. The safety of individuals will be prioritized over products, said the CEO. Locking up creates a delay in the customer experience as an employee is required to open up an enclosure each time for the customer.

“This is traumatizing for our associates and is unacceptable,” Barry said on the call. “We are doing everything we can to try to create [an] as-safe-as-possible environment.”

A common tactic is a loosely-formed gang of criminals who burst into the store and make off with an entire shelf’s worth of high-value goods, which they then resell. Barry said in an interview with CNBC’s “Squawk on the Street” that the crime surge has begun to hit the company’s bottom line and its ability to retain staff.

Best Buy has reported fourth-quarterly earnings below expectations although shares have gained nearly 40 percent this year despite the supply chain crisis and resulting shortages.

It’s not just Best Buy that has been affected. Other retailers like CVS Health, Neiman Marcus, Kroger, and Walgreens are also facing similar issues, with Walgreens recently closing down five stores in San Francisco because of aggressive shoplifting.

Barry mentioned that San Francisco and other parts of California were “hot spots” for criminal activity but there were problematic areas in other parts of the country as well.

The Best Buy CEO’s comments come days after a dramatic criminal attack on a Nordstrom store in Walnut Creek, California. On Saturday, a gang of 80 thugs pulled up to the store, blockaded the entry, and ransacked the luxury store. Employees were assaulted in the raid, which was over within a minute.

Then there was another incident with a Nordstrom store in The Grove retail and entertainment complex in Los Angeles where a group of thieves smashed windows, triggering a police pursuit. Three people have been taken into custody.

The thefts are reportedly part of organized crime networks that recruit mostly young men for $500 to $1,000 to steal high-value store merchandise. The goods are then shipped to other parts of the country or resold online. The number of crimes has seen an increase during the holiday season, according to law enforcement officials.

“Crew bosses organize them, they’ll give him the crowbars, and in some cases even rent them cars, or provide them with escape routes or a list of products to actually go out and steal. It looks very chaotic but it’s actually very well organized,” Ben Dugan, president of the Coalition of Law Enforcement and Retail, said to ABC News.

Retail security guards are not equipped to handle such aggressive criminal behavior. They’re not trained to subdue suspects or pursue them, but instead, to simply “observe and report,” according to mall security expert David Levenberg.

“The value of the merchandise is not worth somebody being injured or killed,” he told ABC News.

Levenberg added that cities with progressive prosecutors like Los Angeles and San Francisco are the hardest hit. “The consequences are minimal and the profits are substantial,” said Levenberg.

Many do not consider the recent spate of thefts in places like San Francisco as “shoplifting” because the term denotes an effort to conceal the crime.

One of the reasons behind this increase in criminal behavior is that, according to California state law, stealing merchandise worth $950 or less is just a misdemeanor, which means police won’t bother to go after the criminals. In cases when they do, and capture the perpetrator, prosecutors will let it go.

California Gov. Gavin Newsom recently signed a new law in which he made shoplifting, even below $950, a crime but only when an organized syndicate is behind it and they plan to resell the stolen goods.