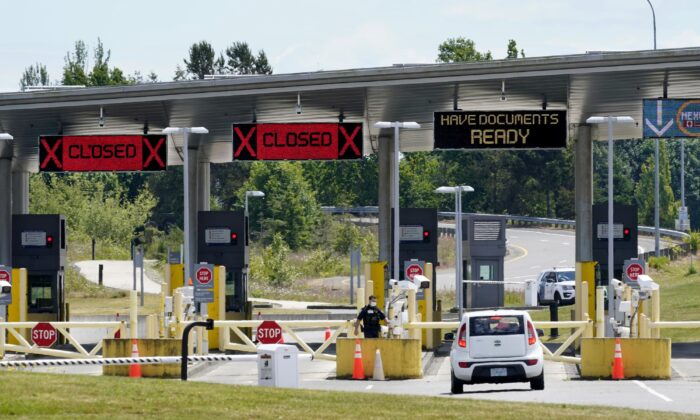 A car approaches one of the few lanes open at the Peace Arch border crossing into the U.S. in Blaine, Wash., on June 8, 2021. (Elaine Thompson/AP Photo)
Executive Branch

The Biden administration announced Monday it will extend the non-essential travel restriction for another month at the land borders with Canada and Mexico.

“Today, the administration’s announcing a move to a safer and more harmonized global approach to international, inbound air travel,” Zients responded when asked about the land border, saying the United States would ease travel restrictions on COVID-19-vaccinated foreign visitors arriving by flight.

“We do not have any updates to the land border policies,” Zients added.

The land border restrictions were enacted in March 2020 to deter COVID-19 spread and renewed month by month afterward. American citizens or permanent residents returning to the United States and other activities such as traveling for medical reasons or to attend educational institutions are deemed essential traveling. They won’t be affected by the restriction.

On Aug. 9, Canada announced that U.S. tourists could visit the country if they were fully vaccinated against the CCP (Chinese Communist Party) virus.

The closures also don’t affect illegal immigration, which has skyrocketed under President Joe Biden, or tens of thousands of Afghan evacuees, not all of whom are being tested for COVID-19.

Republicans and some Democrats have repeatedly criticized the Biden administration over the border crisis.

During Monday’s briefing, the White House press secretary Jen Psaki refused to acknowledge that the extension was partly due to the southern border crisis.

“Well, this is an ongoing process, right? Title 19 is what is in place, of course, at land borders,” Psaki said, referring to the search and arrest authority granted to the customs officers. “We don’t have any updates or predictions at this point in time, but obviously we’re continuing to consider, as is evident by our announcement today, how we can return to a place of travel and people being able to move from country to country, including at our land borders.”

Lawmakers, Republican and Democratic, have criticized the latest extension.

“On the same day the Biden Administration announced it will start to ease foreign travel restrictions with several countries, including China and Iran, President Biden still refuses to even establish a clear plan for reopening the northern border,” Rep. Elise Stefanik (R-N.Y.) said in a statement. “It’s past time for this administration to do its job, so members of the North Country can be reunited with families, tourism can resume, and small businesses no longer have to suffer from this administration’s failure. This prolonged closure has been devastating for our region, and New York deserves better.”

Rep. Brian Higgins (D-N.Y.), who serves as Chair of the Northern Border Caucus and the Canada-U.S. Interparliamentary Group, also criticized the extension as “completely unnecessary and unexplained.”

“It is welcome news that the White House is making progress on reciprocating international public health measures to protect air travelers. Yet it is inexplicable that no announcement on easing travel restrictions at land ports of entry is being made today since the livelihoods of communities across the Northern Border depend on cross-border commerce,” Higgins said in a statement.

“We had hoped that by now, we would have opened up travel through the ports of entry, but regrettably because of the Delta variant, we’ve been delayed in doing so,” Mayorkas responded to a question from The Buffalo News.

“We have the ability, of course, to ease it or eliminate it sooner if the data suggests we should,” Mayorkas added.