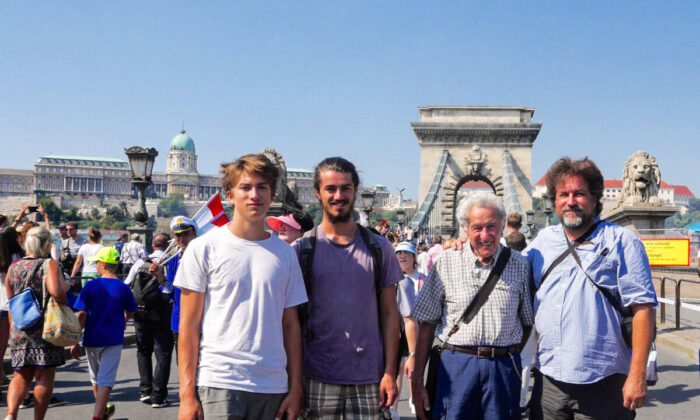 Andy Dobo (second from right) in Hungary on a recent trip there. Dobo, now 85, worked for the Communist-run telephone company in Budapest during the 1956 Hungarian Revolution when he was 20 years old. He was among the workers who unplugged the phone lines to disrupt the communications of the Russians calling in at that time. Dobo is pictured with his son, Ken (far right), and two grandsons. (Photo courtesy Andy Dobo)
US News

At Anniversary of Hungarian Revolution, Some Refugees See Communism Creeping Into US

When the 65th anniversary of the Hungarian Revolution against Russian communists was commemorated on Oct. 23, Andras Pongratz of Scottsdale, Arizona, was among those speaking to thousands in Budapest about the importance of that time and the reasons for their uprising.

You’d never know it by looking at the short and stocky, bespectacled silver-haired man, but he was among those to throw the first brick, per se, that would help crack the foundation of communism when he was 17 years old.

For the last three weeks, the 82-year-old Pongratz has been in Budapest. He was invited to his homeland by the Hungarian government for commemoration ceremonies. They will remember the bright autumn day when thousands of the younger generation protested in the streets, bombed Russian tanks with Molotov Cocktails, shot at soldiers, and briefly became victorious in their quest for freedom over rigid communist rules.

Pongratz helped a large crowd of people knock down the statue of Joseph Stalin, viewed as a symbol of hatred in Hungary’s Heroes Square in Budapest on Oct. 23. After an attempt to pull it down with large cables failed when the cables snapped, a student at a nearby welding school brought his welder. Pongratz used it to cut the Stalin statue off at the knee, and much to the sheer joy of the protesters, it toppled with a resounding thud.

Out of frustration and fury, Pongratz, some of his siblings, and a younger generation led a protest that boiled over into slightly more than two weeks of fierce battles. The ’56 Revolution that the Russians quashed by Nov. 10, resulted in 2,500 deaths of Hungarians and 700 Red Army soldiers. In the wake of the revolution, 200,000 Hungarians fled their country, and about 30,000 Hungarian refugees emigrated to the United States with the help of relatives and sponsorship.

They came to the United States for freedom of religion, freedom of speech, freedom of the press, and individual freedom. They simply wanted a better life and to escape the horrors of  Communism, something some of the freedom fighters and refugees believe is creeping into America.

Pongratz could not be reached for comment for a 65th-anniversary interview as he was following an itinerary in Budapest, but in past interviews, he always has beamed with pride for what he and his fellow Hungarians accomplished, albeit for a fleeting moment.

It all started with Hungarian college students and young adults marching in the streets. As the crowds grew and ripped out sickles from Hungarian flags, sentiment grew in front of the radio station and Parliament building and they shouted their demands for freedom. Then, soldiers on the roof of the Parliament building began shooting down into the crowd. Fierce fighting followed for nearly the next two weeks with the Hungarians initially gaining the upper hand.

The Russians thundered back into Budapest with a vengeance on Nov. 3, and took back the country. The communists targeted those who participated in the revolution for arrest and many with execution, so thousands of Hungarians didn’t waste any time in making a run for the borders to escape their homeland.

Pongratz’s son, Eddie Pongratz, 51, of Tucson, said that remembering October 23 is very important to his father, and to his family.

“The pictures that were taken during that time don’t show everything,” Eddie Pongratz added. “The effects of communism were much worse than that. It’s obvious that with everything going on here in the United States, the administration and outside forces are trying to push us into communism.”

Andras and all eight of his siblings came to the United States in the wake of the revolution with their mother. Their father died in Hungary from illness in 1956.

Andras’ older brother, Gergely Pongratz, who helped re-assemble the canon in Budapest’s Corvin Square that destroyed 15 Russian tanks, died of a heart attack in Budapest in 2005 on the grounds of the 1956 Hungarian Revolution Museum he started.

In the wake of the ’56 Revolution, Andras Pongratz made it to the Austrian border in a three-day trek before coming to Boston. After a harsh blizzard in 1978, Pongratz moved to Arizona for its much warmer climate.

In a past interview, Pongratz said, “When we gained the advantage over the Soviets, the fighters celebrated as if they had finished the revolution.”

Eva Mitterman, 81, of Greenville, Ohio, remembers the actions of her husband, George’s actions as a teenager during the ’56 Revolution in Budapest. George Mittermann, who died about two years ago at age 89, fought in the streets of Budapest against the Russians.

Armed with only a Molotov cocktail, Mittermann was approaching a Russian tank in the street. The turret opened with an arm coming out of it, waving a Hungarian flag. After Mittermann let his guard down, a Russian soldier emerged from the turret, firing many shots at Mittermann. A bullet went through Mittermann’s leg. Bleeding profusely, Mitterman was so charged with adrenaline, he continued running at the soldier in the tank and threw the Molotov cocktail down the turret. He assumed the soldier was burned inside.

Mittermann carried the scar from the gunshot wound the rest of his life, but never regret.

“We hated communism,” Eva Mittermann said. “We wanted to live in freedom. Living under communism is no good. Our sons, Frank and George Jr., know the importance of what their father did to fight for our freedom.”

“It seems like the government here is trying to control us more,” Eva Mittermann added. “They are telling us, ‘you must do this’, ‘you can’t do that’. They have started controlling us through the pandemic.”

But as far as the ’56 Revolution, it wasn’t necessarily just the fighting and shooting in the streets that were critical to Hungary pulling off its short-lived victory.

It also was roles people played behind the scenes that proved critical to Hungary’s efforts for the greater good. The Hungarians were in it together.

Andras Dobo of Beavercreek, Ohio, a suburb southeast of Dayton, was 19 years old and working in an amplifier station for the telephone company in Budapest.

Like any other day, Dobo went to work on Oct. 23. As his workday continued, the protests developed into the revolution and major battles for the next several days. The uprising drew immediate international attention, and the world stood by and watched.

“When our review board would come back and examine the wires and the u-plugs, they would just say something must’ve been wrong with the lines,” Dobo added, “They didn’t know any different. We had food and water, and were able to stay and work at the phone company while everything was going on.”

After the Russians regrouped and returned to Hungary with more tanks, weapons, and soldiers in strategic points, Dobo saw how hopeless Hungary’s situation was. After consulting with his parents, Dobo decided it was best to leave the country.

“It was just a hopeless situation,” Dobo said. My father disagreed with me and said I should stay,” Dobo said. “My mother said ‘maybe there’s better opportunities elsewhere. I looked toward the West and the Uited States because it was a place known for freedom.”

Dobo left Hungary in late November, 1956. He was walking with a group of people who were stopped by a guard by the Austrian border. The guard wondered if they had anything they could give him, and Dobo gave him a wrist watch he had inherited from his aunt.

Dobo first came to Cedar Rapids, Iowa, for an engineering job, but in the early 1970s, Dobo and his wife, Janet, moved to Dayton, Ohio, after he accepted a job offer to become an engineer at Wright-Patterson Air Force Base in Dayton.

“I was lucky to come to Dayton,” Dobo said. “At a time when various ethnic groups were fading, Dayton still had a fairly active Hungarian community.”

“In retrospect, looking back on 1956, I think what was most important was that we crushed all the political views of the communists, their ideology,” Dobo said. “But it wasn’t permanent.”

Despite the disruptions currently happening in the United States with the uncertainty surrounding the recovery from the CCP (Chinese Communist Party) virus, workforce shortages, gas prices skyrocketing and supply chain issues, Dobo doesn’t believe the U.S. is slipping toward a socialist or communist government.

Tommy Patay, an industrial chemist who left Hungary to get away from communism and settled in Cleveland in 1967 , believes that the current administration is pushing the United States toward communism. “Very fast,” he said.

Patay’s uncle, Karoly Balla, fought for Hungary in World War II. He later was executed by the communists because he wasn’t conforming to their ideology and rules after they took over the country, Patay said.

For the last 38 years, Patay has been a baker and has owned Tommy’s Pastry Shop in the west Cleveland suburb of Lakewood. He believes the best way to hold Communism at bay in the United States is to beat it at the ballot box at election time.

“If we don’t,” he said, “the United States will only have the remnants of Democracy.”

Emory Bogardy, a retired mechanical engineer who also is a prolific watercolor artist in Cleveland, also left his home and family in Esztergom, Hungary, near Budapest following the uprising. He and a group of others armed with guns, crossed the Danube River in a boat and made it into Austria.

The Hungarian Catholic church owned millions of acres of land in Hungary, and his father was the second-highest in command in overseeing it.
However, the Communists took over all of the land during their regime.

“The Catholics were the big enemy to the communists,” Bogardy said. “If anything, communists hated freedom of religion.”

As far as the United States moving toward a Communist government, Bogardy believes that the people who oppose communism outnumber those who support it and ultimately would stop it from happening in the U.S.

“The best thing to do is vote certain people out of office,” Bogardy said.