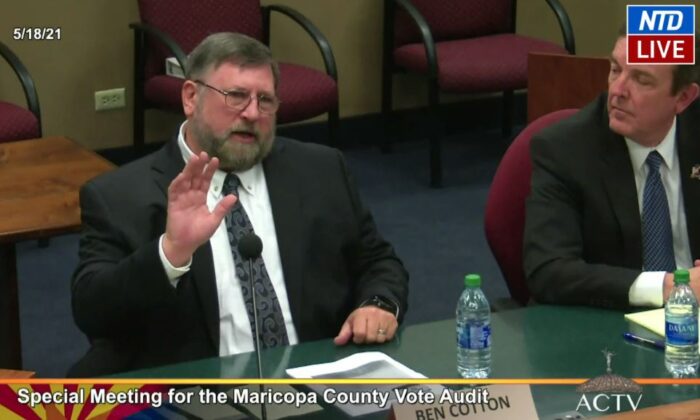 Ben Cotton, founder of CyFIR, one of four firms working on the 2020 election audit in Maricopa County, Ariz., testifies to state senators in Phoenix on May 18, 2021. (Arizona Capitol Television via NTD/Screenshot via The Epoch Times)
US News

Arizona Auditor: Did Not Backtrack on Election Database Deletion Allegation

A forensic auditor helping conduct an audit of 2020 election machines in Arizona’s largest county disputed on May 20 reports claiming he backtracked on allegations that files were deleted from one of the machines.

“My testimony on May 19th before the AZ Senate is being taken out of context by some media outlets. To confirm: the ‘Databases’ directory on the EMS Primary Server WAS deleted containing the voting databases. I was able to recover the deleted databases through forensic data recovery processes,” Ben Cotton, founder of CyFIR, said in a statement emailed to The Epoch Times by the audit’s liaison.

Some reports, including articles from The Associated Press and CNN, alleged auditors had “backtracked” from or “reversed” allegations that files were deleted from a machine.

AP, for instance, claimed that Cotton said that “data was not destroyed, reversing earlier allegations that election officials in the state’s most populated county eliminated evidence.”

CNN claimed that auditors “backtracked” from claims that a key database had been deleted.

Both outlets left out the crucial context from Cotton’s testimony before Arizona state senators on May 18.

Cotton said in examining the machine that he discovered a master file table “that clearly indicated that the database directory was deleted from that server.”

Outlets had only included the latter portion in attempting to promote the idea that Cotton’s testimony conflicted with what Arizona Senate President Karen Fann, a Republican, told Maricopa County in a May 12 letter.

An Associated Press spokesman declined to say whether the wire agency would be updating its articles. He instead pointed to a new article that included Cotton’s most recent statement.

CNN didn’t respond to an inquiry.

Fann told The Epoch Times on May 20 that there was no backtracking of the deletion claims.

“The file was deleted but Cyfir was able to recover it from other areas. But yes, the file had been deleted on that portion of the drive,” she wrote in an email.

The Senate and its audit team have clashed with county officials over the claims.

In her recent letter, Fann said that in addition to the database directory apparently being deleted, the main database for election management system software wasn’t found anywhere on the machine.

“This suggests that the main database for all election related data for the November 2020 General Election has been removed,” she wrote.

Maricopa County officials rebutted the allegations in a letter, a board meeting, and a technical analysis.

But Cotton stood by the audit’s preliminary findings and said his team is trying to ascertain whether the files that were recovered can be analyzed.

“We are performing data continuity checks to ensure that the recovered databases are usable,” he said.

The audit is on hold as high school graduations take place at Veterans Memorial Coliseum in Phoenix. It’s scheduled to resume on May 24.