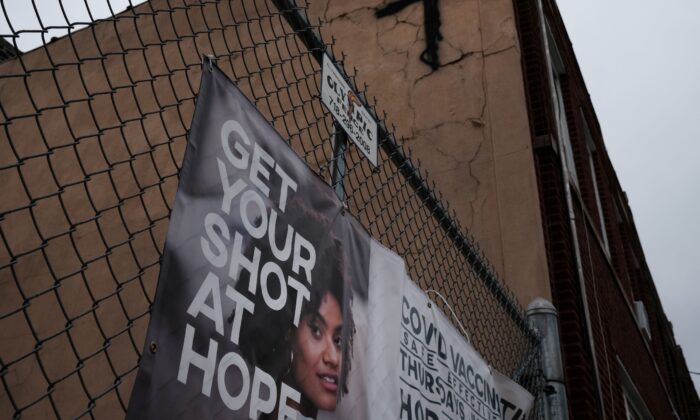 A sign asks people to get the COVID-19 vaccine in a Brooklyn neighborhood which is witnessing a rise in COVID-19 cases in New York City, on July 13, 2021. (Spencer Platt/Getty Images)
Vaccines & Safety

A federal appeals court on Monday upheld Indiana University’s (IU) COVID-19 vaccine requirement, after a group of students sued the school arguing that the mandate is unconstitutional.

The Chicago-based appeals court upheld an Indiana district court judge’s ruling that found that the university was acting reasonably “in pursuing public health and safety for its campus communities.”

Both courts rejected a request by eight IU students, who sued the school in June, claiming the inoculation requirement would violate their constitutional rights by forcing them to receive unwanted medical treatment.

The policy makes vaccination a condition of attending the university, and students who don’t want to get vaccinated can also seek “ample educational opportunities” elsewhere, according to the appeals court ruling.

The university on May 21 informed all students and employees of the vaccine mandate beginning in the fall. IU said failure to be vaccinated against COVID-19 by the fall semester will result in students’ class registrations being canceled and their university-issued IDs terminated, and they will be prohibited from any on-campus activity.

Its website states that approved exemptions will be extremely limited to a very narrow set of criteria, including religious medical exemptions with documentation or medical deferrals, and an online program exemption.

The eight IU students’ lawsuit claims that the school’s vaccine mandate violates the liberty protected by the 14th Amendment, including rights of personal autonomy and bodily integrity and the right to reject medical treatment.

James Bopp, a lawyer for the plaintiffs, said he would ask the U.S. Supreme Court to review the rulings, which legal experts say are the first from federal courts regarding college immunization mandates. Similar lawsuits against student vaccine requirements at the University of Connecticut and the California State University system are awaiting action.

College officials across the country have struggled with whether they have the authority to require student vaccinations, which some see as key to returning campus to in-person classes and other normal activities.

More than 80 percent of IU students have reported receiving at least one dose of the CCP (Chinese Communist Party) virus vaccine, according to IU spokesman Chuck Carney.