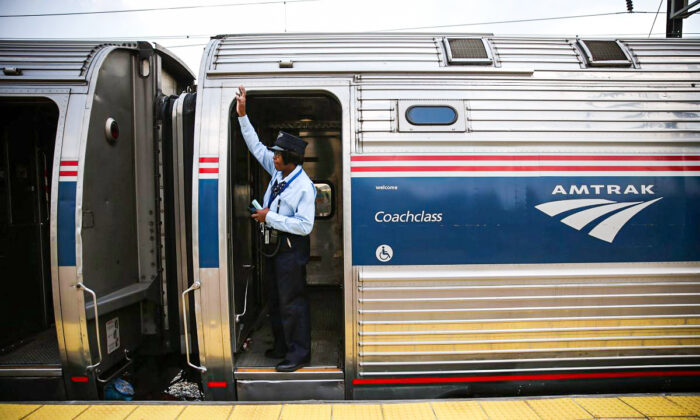 Passenger railroad operator Amtrak said Tuesday it will suspend its COVID-19 vaccine mandate for employees and no longer expects service disruptions in January.

Amtrak Chief Executive Bill Flynn said in a memo obtained by The Epoch Times that employees who aren’t vaccinated can get tested instead. Fewer than 500 Amtrak workers are unvaccinated, he said.

Informing Amtrak’s decision was a recent federal court order that “halted the enforcement of the executive order for federal contractors” which caused the firm to reevaluate its policy toward vaccine mandates, Flynn wrote.

It means Amtrak will revert back to its original vaccine mandate that it announced in August, which allows for regular testing of unvaccinated workers, Flynn said. That will allow “for testing as an alternative to getting vaccinated,” the memo said.

The memo added that Amtrak employees “required to submit testing and fail to do so will be placed on an unpaid leave of absence initially.”

Amtrak, a quasi-public corporation that receives some federal dollars, was slated to terminate the employment of about 500 unvaccinated workers next month and anticipated service cuts. Amtrak president Stephen Gardner testified during a House hearing last week that he expected cuts because the railroad operator didn’t have enough staff to operate all its trains.

But with Tuesday’s decision, the service cuts can be averted, Flynn said.

“After reviewing our system service plans in light of these changes, we do not anticipate having system-wide service impacts in January,” Flynn said.

Flynn added his company “will continue to update its vaccine policy as needed and follow the latest health and safety guidance. We believe these most recent changes are both appropriate and prudent, given the recent court decision and the continuing and evolving pandemic.”

When asked for comment on Amtrak’s decision on Tuesday, White House press secretary Jen Psaki told reporters that the vast majority of workers have been vaccinated. “They’re trying to work to ensure that there are adequate employees on the job,” she said.

“Amtrak is doing the right thing,” Jim Mathews, president and CEO of the Rail Passengers Association, said in a statement to news outlets. “This addresses the issue without compromising safety. Everyone—crews and passengers—is safest if everyone is vaccinated. But Amtrak reached huge numbers of vaccinations within their staffs, and that’s to their credit.”

Congress approved $66 billion for railroads as part of an infrastructure bill that was passed several weeks ago, and Amtrak will receive $22 billion and $36 billion for competitive grants. But Amtrak saw demand fall during the COVID-19 pandemic and is seeing around 70 percent of pre-pandemic demand, Gardner told the House panel last week.

The Epoch Times has contacted Amtrak for additional comment.