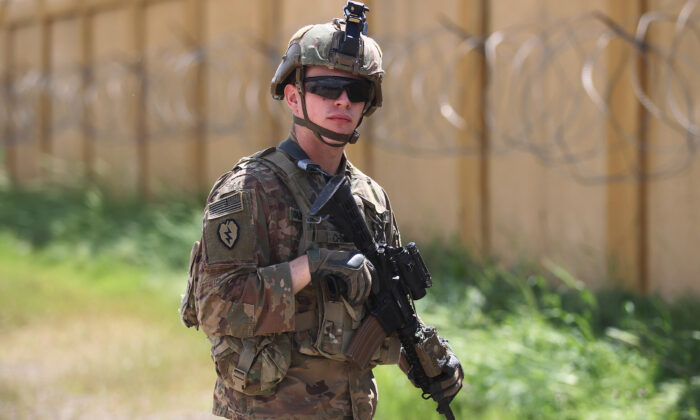 A U.S. Army soldier stands on duty at the K1 airbase northwest of Kirkuk in northern Iraq on March 29, 2020. (Ahmad Al-Rubaye/AFP via Getty Images)
National Security

America’s Veterans Are Killing Themselves at an Alarming Rate: Report

“I felt guilty because my guys got hurt, and I was in charge. It was my fault,” he said. “They started committing suicide when we got home pretty quick.”

McDaniel dealt with alcohol abuse, divorce, and severe depression before finding help; he now works for a non-profit organization that assists veterans who are dealing with trauma.

Many of his fellow veterans, however, haven’t been as fortunate.

“Now more people from my unit have committed suicide than died in combat,” the Iraq combat vet said. “It really kind of strips your humanity and soul away, war does.”

McDaniel’s story is detailed in a report released last month by Brown University’s Costs of War project. The report reveals startling trends in suicide rates of veterans who served in wars after the 9/11 terror attacks, including Afghanistan and Iraq as well as deployments in five other spots around the world.

According to the report, more veterans of the terror wars have killed themselves than those who died in combat. The paper estimates that 30,177 active-duty personnel and post-9/11 veterans have died by suicide—significantly more than the 7,057 service members killed in post-9/11 war operations.

The suicide rate among veterans of the terror wars exceeds that of the general population, according to the report.

And while the government hasn’t kept proper records of veteran suicides in earlier wars, statistics on active-duty suicides suggest that rates among veterans of the terror wars could be some of the highest in 80 years.

Veterans didn’t always kill themselves in such high numbers. According to the report, suicide rates among veterans used to roughly match that in the general population. And among active service members, suicide rates typically fall during wartime—with the exceptions of the Vietnam War and the Global War on Terror.

The report posits several reasons for these trends.

Historically, stress and burnout, access to firearms, the difficulty of reintegrating into civilian life, and a military culture that doesn’t prioritize mental health have been factors contributing to veteran suicides, according to the report. With the Vietnam War and Global War on Terror, soldiers returning home have had to deal with the additional burden of an unsupportive society, the report said.

“Unlike the public’s celebratory treatment of World War II veterans as heroes, sections of the public have met the return of veterans from Vietnam and the War on Terror with hostility for the former and often disinterest for the latter,” the report said. “If there is something novel to the Global War on Terror, it may be the diminishing approval and ignorance of the public coupled with persistent veteran stereotypes, which further alienate them from civilian society.”

The report also attributed the inordinately high suicide rates to the use of IEDs in the terror wars, which has led to a spike in brain injuries among combat vets. Many brain-injured vets are redeployed, exacerbating their mental trauma, the report said.

“Caused by blast injuries from IEDs, collisions and rollovers, or any situation causing blunt trauma to a service member’s head, [brain injuries] are the ‘signature injury’ of the Iraq and Afghanistan conflicts, affecting between 8 and 20 percent of military personnel,” the report said.

Along with physical injuries, the report explored the effects that “moral injury” has had on vets.

“Rather than a physiological response, one may instead develop a wound of the soul, or one’s core moral self,” the report said, citing a 2014 study in the research journal Traumatology.

“Perceived transgressions against one’s sense of morality had the strongest association with ongoing suicidal ideation among 151 active-duty military personnel compared with transgressions of others or betrayal by others.”

The report identified instances in which the government has failed America’s veterans. According to the report, the Department of Veterans Affairs (VA) has failed to spend “millions” of dollars set aside for suicide prevention outreach.

“Worse, 31 percent of ‘denied or rejected non-VA emergency care claims were inappropriately processed’ in 2017, meaning veterans had to take on the financial burden of health care for an incredible sum of $716 million,” the report added, citing internal VA audits.

“The DoD [Pentagon], VA, and other actors should take moral injuries, military sexual trauma, and other traumas outside of the theater of war as seriously as physical wounds and more readily diagnose and respond to them,” the report concluded. “Unless the U.S. government and U.S. society makes significant changes in the ways we manage the mental health crisis among our service members and veterans, suicide rates will continue to climb.

“That is a cost of war we cannot accept.”