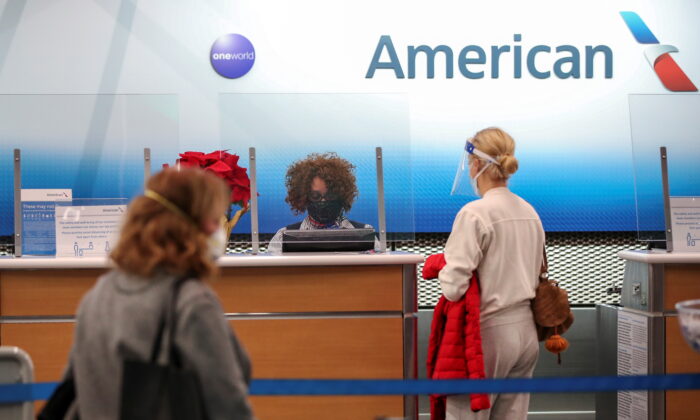 An American Airlines agent helps a customer check in at O'Hare International Airport in Chicago on Nov. 25, 2020. (Kamil Krzaczynski/file/Reuters)
Companies

In a letter to employees obtained by The Epoch Times, Chief Operating Officer David Seymour blamed “severe winds” in the area of its Dallas-Fort Worth hub.

“With additional weather throughout the system, our staffing begins to run tight as crew members end up out of their regular flight sequences,” he said. “To make sure we are taking care of our customers and providing scheduling certainty for our crews, we have adjusted our operation for the last few days this month by proactively canceling some flights.”

American said it expects the issues to be resolved soon.

The spokeswoman said that the problems aren’t related to the company’s COVID-19 vaccine mandate.

Weather was the catalyst, although managemental failure also contributed, Tajer told The Epoch Times in an email.

“Management is failing at the most fundamental part of running an airline. Connecting crews to the airplane. Our employees are suffering this failure as much as passengers as crews are stuck out into their days off while scrambling to find hotels,” he said.

Of the flights canceled on Oct. 30, all but around a dozen were due to the inability to connect workers to airplanes, Tajer said.

“While we are still working through the details of the federal requirements, it is clear that team members who choose to remain unvaccinated will not be able to work at American Airlines,” Doug Parker, American’s CEO, said in a memorandum that day.

Executives at the company later said employees must be fully vaccinated by Nov. 24 or be fired.

Most U.S.-based airlines have imposed mandates, some in response to President Joe Biden’s plans to force private businesses to either get proof of vaccination from employees or require them to undergo weekly COVID-19 testing.

The head of the pilots association warned the White House and Congress last month that mandates could trigger chaos in the near future.

Southwest Airlines canceled thousands of flights earlier this month, leaving many travelers stranded for days. The airline claimed the problems were mostly due to unfavorable weather and not related to the mandate it imposed, although other airlines didn’t suffer problems at the same time. The carrier later delayed a plan to put workers who don’t comply with the vaccination requirements on unpaid leave.

In addition to the weekend cancellations from American, the airline delayed hundreds of flights between Oct. 29 and Oct. 31, according to the tracking site FlightAware. That included 73 delays early on Oct. 31.

American said that nearly 1,800 flight attendants who were on leave would be returning to work soon and that it was hiring over 600 more flight attendants in addition to working to hire 4,000 workers for other positions.

“The hiring of pilots and within tech ops continues to take place, and we already began ramping up hiring in reservations so more team members will be in place for the holiday season,” it said.

A spokeswoman for the Federal Aviation Administration told The Epoch Times on Oct. 31 that the agency is aware of the cancellations but directed any inquiries to American Airlines.