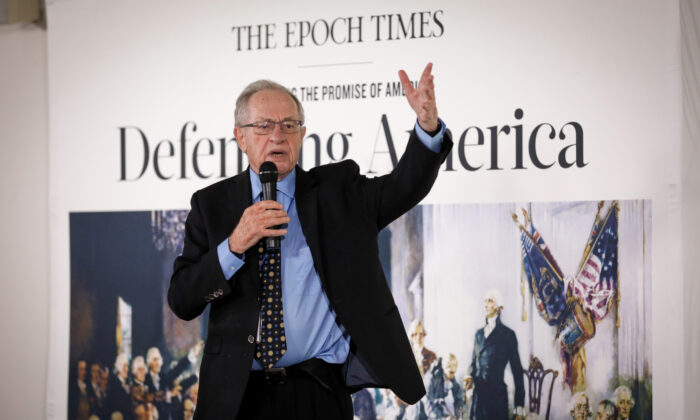 Harvard law professor emeritus Alan Dershowitz says Kyle Rittenhouse “should be acquitted” of killing two men and wounding a third during riots and protests last year in Kenosha, Wisconsin, and he should file defamation lawsuits against media outlets for claiming that he’s guilty of murder.

“If I were a juror, I would vote that there was reasonable doubt [and] that he did act in self-defense,” Dershowitz told Newsmax on Nov. 13.

Rittenhouse, if acquitted, should then “bring lawsuits” against corporate news outlets for articles claiming the teen engaged in “vigilante justice,” Dershowitz said.

Several years ago, then-Kentucky high school student Nicholas Sandmann filed defamation suits against CNN, The Washington Post, and other outlets following accusations of racism against him after a viral video showed an encounter with a Native American activist in Washington, D.C. Last year, Sandmann ended up reaching a settlement with CNN and The Washington Post.

“The idea is to make the media accountable for deliberate and willful lies,” said Dershowitz, referring to Sandmann’s case.

“They want a result, and if they don’t get their results—and you know this seeps through to the jury. I worry that the jury could be influenced by the fear that if they vote to acquit, they’ll be called racist and they’ll be attacked.”

Rittenhouse, 18, is charged with killing Joseph Rosenbaum, 36, and Anthony Huber, 26, and wounding Gaige Grosskreutz, 27, in Kenosha on Aug. 25, 2020, during protests and rioting that followed a police-involved shooting. Rittenhouse has pleaded not guilty.

According to video footage of the incident, both Huber and Grosskreutz chased Rittenhouse as he was trying to run toward police after shooting Rosenbaum. Several videos and photos also show Huber hitting Rittenhouse with a skateboard, while Grosskreutz, who himself was armed with a handgun, testified last week that he thought Huber was attempting to attack Rittenhouse.

Dershowitz’s remarks come after Judge Bruce Schroeder, the presiding judge in the case, said he may allow the jury to consider several lesser charges in addition to the murder charges that prosecutors brought against Rittenhouse.

On Nov. 12, he told Rittenhouse that with the lesser charges, “you’re raising the risk of conviction, although you’re avoiding the possibility that the jury will end up compromising on the more serious crime.”

“You’re also decreasing the risk that you’ll end up with a second trial because the jury is unable to agree,” he said. Rittenhouse confirmed that he understood.