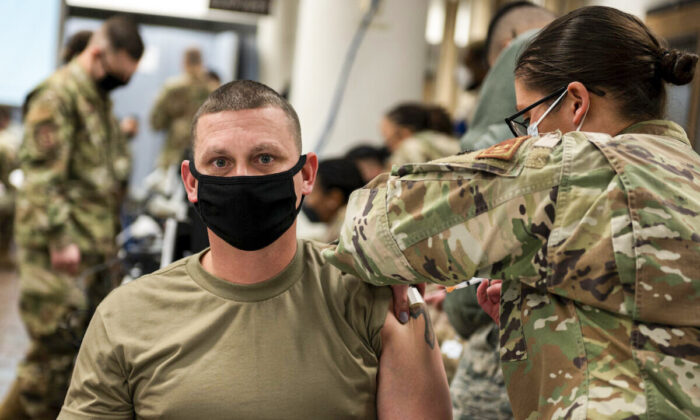 Some 40 Air Force recruits and trainees have been kicked out of the service for refusing to comply with the Biden administration’s COVID-19 vaccine mandate, a spokeswoman confirmed on Monday.

Air Force spokeswoman Ann Stefanek told Stars and Stripes that the individuals had been handed entry-level discharges, meaning that if they choose to get vaccinated against COVID-19 in the future, they may eventually reenlist.

She said approximately 23 of the recruits had been undergoing basic training, and the others were in technical training when they were discharged from the Air Force. Entry-level discharges, or uncharacterized discharge, are given to individuals who have yet to complete 180 days of military service.

Troops had been asked to get vaccinated against COVID-19, the disease caused by the CCP (Chinese Communist Party) virus by a Nov. 2 deadline.

Those who don’t get a vaccine by the deadline, and have not received or are not in the process of seeking a religious or medical exemption, will be deemed in violation of a “lawful order and subject to discipline under Article 92 of the Uniform Code of Military Justice,” the Air Force said last month. They could be court-martialed or face other disciplinary measures, it added.

Each branch head decided separately on mandate details, including deadlines. The Air Force has the earliest deadlines for active-duty troops and reserves.

An Air Force spokesperson told The Epoch Times earlier this month that its deadlines would not be pushed back.

According to Air Force data, as many as 12,000 active duty airmen and guardians were still unvaccinated as of late last week. Some have requested or gotten exemptions, others have refused outright. They have had until Nov. 1 to request exemptions.

The Air Force also told The Epoch Times it is not tracking exemption requests and therefore could not say how many had been approved, if any. The service told news outlets last week that it would start releasing approved exemption numbers after the Nov. 2 deadline.

Air Force Capt. Molly Lawlor, 28th Bomb Wing chaplain, said that a “very small percentage” are seeking a religious exemption at the base. “People are just trying to figure out how this new requirement fits into their belief system and the decisions that they want to make,” she said.

Pentagon Press Secretary John F. Kirby said during a press briefing on Monday that about 97 percent of the total force has received at least one dose of the COVID-19 vaccine, including 99 percent of sailors, 97 percent of airmen, and 93 percent of Marines. The vaccination rate is above 90 percent among soldiers, he added.

“So just in terms of first dosage, there’s been a lot more progress and we continue to see the men and women of the force doing the right thing—which is getting vaccinated,” Kirby told reporters.

The Epoch Times has contacted a spokesperson of the Air Force for comment.