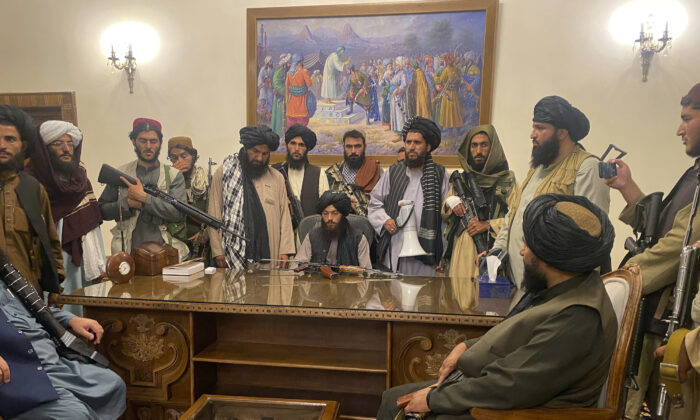 Afghanistan’s president, Ashraf Ghani, on Sunday fled the country as the Taliban terrorist group surrounded the capital, Kabul, according to a senior official, while the Taliban entered the Afghan presidential palace.

Photos circulating online show members of the Taliban, holding AK-47-style rifles, inside the palace. Speaking to Al Jazeera TV during a live stream, a member of the group who was inside the presidential palace said the Taliban is planning to declare Afghanistan the “Islamic Emirate of Afghanistan” in the near future.

“We have reached a victory that we couldn’t imagine,” said Mullah Baradar, a co-founder of the Taliban, in a video addressed to the group’s supporters. He added that “now it’s about how we serve and secure our people, and ensure their good life to best of ability,” according to a translation.

Abdullah Abdullah, the head of the High Council for National Reconciliation, confirmed on social media that Ghani fled the country, coming about a day after Ghani claimed that he would be able to muster the remnants of the Afghan government forces to mount a defense of Kabul, a city of 6 million.

“The former president of Afghanistan left Afghanistan, leaving the country in this difficult situation,” Abdullah said in a video, according to a translation of his comments on social media. “God should hold him accountable.”

“I came across a hard choice; I should stand to face the armed Taliban who wanted to enter the palace or leave the dear country that I dedicated my life to protecting … the past 20 years,” he said in the message, according to a translation.

Videos circulating online showed the Taliban entering Kabul, with crowds of supporters greeting them. The U.S. Embassy, meanwhile, said in an alert that the Kabul airport was taking fire and called on American staff to shelter in place.

“The security situation in Kabul is changing quickly including at the airport. There are reports of the airport taking fire; therefore we are instructing U.S. citizens to shelter in place,” an embassy security alert stated.

Secretary of State Antony Blinken told media outlets on Sunday that the Taliban should not attack U.S. forces or staff and said it would “be met with a very strong, decisive response.”

Around the same time Ghani departed Sunday, the Taliban terrorist group wrote that it ordered its fighters to enter Kabul after surrounding the Afghan capital city, arguing that it is necessary to prevent “common thieves and robbers” from harming people.

“The citizens of Kabul should not feel any fear from the [Taliban]” and their “forces will enter Kabul city very easily,” said a spokesman for the group. “The military units of the Islamic Emirate entered Kabul to provide security,” the spokesman later wrote.

The Taliban, which was designated as a terrorist organization by the State Department decades ago, also directed its fighters to not enter people’s houses “or to harass or annoy anyone.”

However, across Afghanistan, there have been reports of revenge killings and other brutal tactics in areas that the group seized in recent days.

Before Ghani’s apparent departure, government officials and Taliban spokesmen said they were working on a “peaceful transfer of power.” However, with Ghani’s departure, it’s not clear whether that will happen.

Taliban spokesman Suhail Shaheen told Qatar’s Al Jazeera satellite news channel that the insurgents are “awaiting a peaceful transfer of Kabul city.” He declined to offer specifics on any possible negotiations between his forces and the government.

When pressed on what kind of agreement the Taliban wanted, Shaheen acknowledged that they were seeking an unconditional surrender by the central government.

Separately, Secretary of State Antony Blinken confirmed that U.S. Embassy staff would evacuate Kabul, although he didn’t say whether the United States would keep a diplomatic presence in the country.

Rapid flights of helicopters near the U.S. Embassy began Sunday, a few hours after the terrorists seized the nearby city of Jalalabad—which had been the last major city besides the capital not in Taliban hands.

The United States decided a few days ago to send in thousands of troops to help evacuate some personnel amid reports that embassy staff would be sent to the nearby Kabul airport. Military helicopters shuttled between the embassy compound and the airport, where a core presence will remain for as long as possible given security conditions.

Sunday began with the Taliban seizing the nearby city of Jalalabad — which had been the last major city besides the capital not in their hands. Afghan officials said the militants also took the capitals of Maidan Wardak, Khost, Kapisa, and Parwan provinces, as well as the country’s last government-held border post.

For years now, the United States has been looking for an exit from the war. Washington under President Donald Trump signed a deal with the Taliban in February 2020. More than a year later, President Joe Biden announced his plans to withdraw all American forces by the end of this month, culminating with the anniversary of the Sept. 11 terrorist attacks.