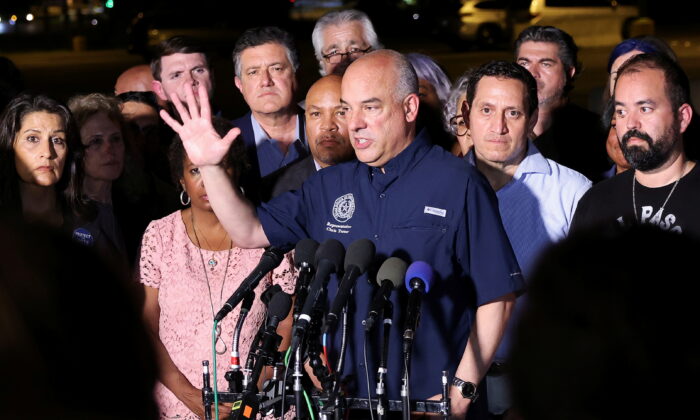 Texas Rep. Chris Turner speaks to the press after Democratic members of the Texas House of Representatives, who are boycotting a special session of the legislature in an effort to block Republican-backed voting reform, arrive at Dulles Airport in Sterling, Va., on July 12, 2021. (Evelyn Hockstein/Reuters)
Texas

Three of the Texas Democrats who flew to Washington this week to stymie efforts to pass election reform legislation have tested positive for COVID-19.

All three members are fully vaccinated against the virus, the caucus said. Fully vaccinated refers to people who have received both Moderna or Pfizer jabs, or the single-shot Johnson & Johnson vaccine. People are not considered fully vaccinated until two weeks have elapsed following their final shot.

“We know that the future of voting for our children and families is at stake and unless we take action, unless we see model legislation passed, our voices will be silent,” Texas Rep. Nicole Collier, a Democrat, told reporters on Capitol Hill on Wednesday.

Democrats who chartered a plane to fly—while others drove—were pictured without masks on the plane.

Republicans have criticized colleagues for leaving the state and Gov. Greg Abbott said they “will be arrested” when they return to Texas.