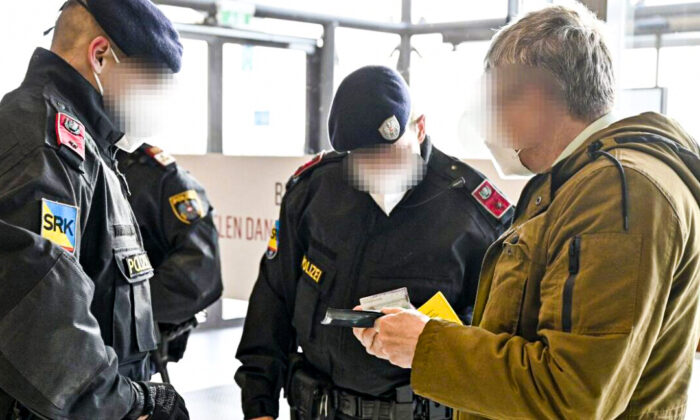 15,000 Checked by Police During First Day of ‘Lockdown of Unvaccinated’ in Austria

After Austria on Monday placed a lockdown on all unvaccinated people, the country’s Interior Ministry confirmed that 120 people were fined by police officers who were tasked with enforcing the controversial mandate.

“Police officers perform the ungrateful but important task of inspecting public spaces,” said Interior Minister Karl Nehammer, adding that about 15,000 people were checked throughout Austria within the first 24 hours of the mandate going into effect. So far, Nehammer said in a news conference, about 120 fines were handed down.

“It’s a tough job. The pressure to control has been massively increased, and that will continue for the next few days,” he said, according to local media.

Nehammer said the main focus of the controls was busy streets and restaurants, reported Austrian publication Kronen Zeitung. Those who refuse to participate in the controls face a fine of up to 1,450 euros ($1,640).

“Thanks to the additional patrols and the standby units that exist throughout Austria, a high level of control can be guaranteed,” General Director for Public Security Franz Ruf said, reported the Kleine Zeitung publication.

Over the weekend, Chancellor Alexander Schallenberg said in a news conference that the lockdown for those who are not vaccinated against COVID-19 would go into effect on Monday, calling on such individuals to “not leave your apartment” except for “certain reasons.” Schallenberg acknowledged that about a third of Austria’s population, or about 2 million, will be affected by the 10-day rule.

Children under the age of 12 and those who recently recovered from the CCP (Chinese Communist Party) virus will be exempt from the controls, the government said. Unvaccinated people will have to stay in their homes unless they were engaged in essential business or travel, the rule stipulates.

“It can happen anytime and anywhere,” Nehammer said over the weekend, reported The Guardian. “Every citizen has to expect to be checked.”

The move was resoundingly criticized by opposition party members, who questioned whether the rule is constitutional. The right-wing Freedom Party said it will create a tier of second-class citizens, echoing concerns from civil liberties groups about different vaccine passport schemes that have been rolled out in several U.S. cities and most European nations.

Demonstrations erupted in the capital city of Vienna as well as Salzburg in response to the lockdown. The Freedom Party said it would challenge the rule’s legality.

But Schallenberg and other government officials said the lockdown is necessary to deal with a recent rise of COVID-19 cases in the country. About 65 percent of Austria’s population is fully vaccinated, according to recent government data.

“My aim is very clearly to get the unvaccinated to get themselves vaccinated and not to lock down the vaccinated, in the long term, the way out of this vicious circle we are in—and it is a vicious circle, we are stumbling from wave to lockdown, and that can’t carry on ad infinitum—is only vaccination,” he said in a radio interview.

Other European nations, including neighboring Germany and the Czech Republic, may also partake in a similar lockdown for the unvaccinated.

Germany’s Green Party co-chair Robert Habeck said the new proposed restrictions would be a “lockdown for the unvaccinated.” Meanwhile, Czech Republic Prime Minister Andrej Babis said this week that his country is considering the same.