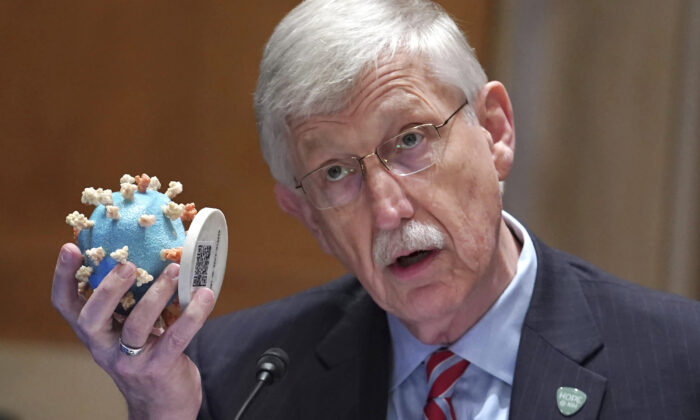 NIH Director Dr. Francis Collins holds up a model of the coronavirus as he testifies before a Senate Appropriations Subcommittee looking into the budget estimates for the National Institute of Health (NIH) and the state of medical research, on Capitol Hill on May 26, 2021. (Sarah Silbiger/Pool via AP)
US News

Nonprofit Watchdog Uncovers $350 Million in Secret Payments to Fauci, Collins, Others at NIH

An estimated $350 million in undisclosed royalties were paid to the National Institutes of Health (NIH) and hundreds of its scientists, including the agency’s recently departed director, Dr. Francis Collins, and Dr. Anthony Fauci, according to a nonprofit government watchdog.

“We estimate that up to $350 million in royalties from third parties were paid to NIH scientists during the fiscal years between 2010 and 2020,” Open the Books CEO Adam Andrzejewski told reporters in a telephone news conference on May 9.

“We draw that conclusion because, in the first five years, there has been $134 million that we have been able to quantify of top-line numbers that flowed from third-party payers, meaning pharmaceutical companies or other payers, to NIH scientists.”

“We now know that there are 1,675 scientists that received payments during that period, at least one payment. In fiscal year 2014, for instance, $36 million was paid out and that is on average $21,100 per scientist,” Andrzejewski said.

“We also find that during this period, leadership at NIH was involved in receiving third-party payments. For instance, Francis Collins, the immediate past director of NIH, received 14 payments. Dr. Anthony Fauci received 23 payments and his deputy, Clifford Lane, received eight payments.”

Collins resigned as NIH director in December 2021 after 12 years of leading the world’s largest public health agency. Fauci is the longtime head of NIH’s National Institute for Allergies and Infectious Diseases (NIAID), as well as chief medical adviser to President Joe Biden. Lane is the deputy director of NIAID, under Fauci.

Only Pastan continues to be employed by NIH, according to Open the Books.

“When an NIH employee makes a discovery in their official capacity, the NIH owns the rights to any resulting patent. These patents are then licensed for commercial use to companies that could use them to bring products to market,” the fact sheet reads.

“Employees are listed as inventors on the patents and receive a share of the royalties obtained through any licensing, or ‘technology transfer,’ of their inventions. Essentially, taxpayer money funding NIH research benefits researchers employed by NIH because they are listed as patent inventors and therefore receive royalty payments from licensees.”

An NIH spokesman didn’t respond by press time to a request for comment.

Andrzejewski told reporters that the Associated Press reported extensively on the NIH royalty payments in 2005, including specific details about who got how much from which payers for what work, that the agency is denying to Open the Books in 2022.

“At that time, we knew there were 918 scientists, and each year, they were receiving approximately $9 million, on average with each scientist receiving $9,700. But today, the numbers are a lot larger with the United States still in a declared national health emergency. It’s quite obvious the stakes in health care are a lot larger,” Andrzejewski said.

He said the files Open the Books is receiving—300 pages of line-by-line data—are “heavily redacted.”

Federal officials are allowed to redact information from responses to FOIA requests if the release of the data would harm a firm’s commercial privilege.

“We believe there is an unholy conflict of interest inherent at NIH,” he said. “Consider the fact that each year, NIH doles out $32 billion in grants to approximately 56,000 grantees. Now we know that over an 11-year period, there is going to be approximately $350 million flowing the other way from third-party payers, many of which receive NIH grants, and those payments are flowing back to NIH scientists and leadership.”

Fauci and Lane told AP that they agreed there was an appearance of a conflict of interest in getting the royalties, with Fauci saying that he contributed his royalties to charity. Lane didn’t do that, according to Andrzejewski.

The governing ethics financial disclosure form in the past defined the royalty payments as income recipients received from NIH, which meant the recipients weren’t required to list their payments on the form.

But Andrzejewski said NIH has refused to respond to his request for clarification on the disclosure issue.

“If they are not, none of these payments are receiving any scrutiny whatsoever and to the extent that a company making payments to either leadership or scientists, while also receiving grants … then that just on its face is a conflict of interest,” he said.

Open the Books is a Chicago-based nonprofit government watchdog that uses the federal and state freedom of information laws to obtain and then post on the internet trillions of dollars in spending at all levels of government.

The nonprofit filed a federal Freedom of Information Act (FOIA) suit seeking documentation of all payments by outside firms to NIH and/or current and former NIH employees.

NIH declined to respond to the FOIA, so Open the Books is taking the agency to court, suing it for noncompliance with the FOIA. Open the Books is represented in federal court in the case by another nonprofit government watchdog, Judicial Watch.