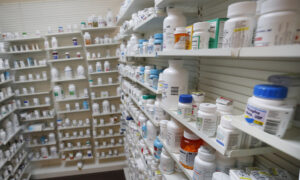 A health worker shows a box containing a bottle of Ivermectin, a medicine authorized by the National Institute for Food and Drug Surveillance (INVIMA) to treat patients with mild, asymptomatic or suspicious COVID-19, as part of a study of the Center for Pediatric Infectious Diseases Studies, in Cali, Colombia, on July 21, 2020. (Luis Robayo/AFP via Getty Images)
UK

An Oxford-led clinical trial programme is starting to trial antiparasitic drug ivermectin on Wednesday as a possible home treatment for COVID-19, the university has announced.

More than 5,000 volunteers have been recruited to participate in the study, but critics have questioned the necessity and the ethics of the trial, saying its effectiveness has already been proven.

According to Oxford University, ivermectin is the seventh treatment investigated by the government-backed Platform Randomised Trial of Treatments in the Community for Epidemic and Pandemic Illnesses (PRINCIPLE).

The low-cost antiparasitic drug, which has been widely used globally to treat parasitic infections for years, has already been used to treat COVID-19 patients in a number of countries.

PRINCIPLE has said in January that it was considering ivermectin for investigation.

Joint Chief Investigator of the PRINCIPLE trial Chris Butler said the readily available drug is a “well-known medicine with a good safety profile.”

“Because of the early promising results in some studies it is already being widely used to treat COVID-19 in several countries,” Butler said.

“By including ivermectin in a large-scale trial like PRINCIPLE, we hope to generate robust evidence to determine how effective the treatment is against COVID-19, and whether there are benefits or harms associated with its use,” he said.

Oxford University said that even though the drug has been used “routinely in some countries to treat COVID-19, there is little evidence from large-scale randomised controlled trials to demonstrate that it can speed up recovery from the illness or reduce hospital admission.”

U.S. Food and Drug Administration, European Medicines Agency, and the World Health Organisation (WHO) have advised against the use of ivermectin, saying more data is needed.

The British Ivermectin Recommendation Development Group (BIRD), a group of international medical professionals who have been advocating for the use of ivermectin against COVID-19, said the group welcomes the new trial while questioning its merit.

“The strength of evidence for ivermectin has this week been supercharged by the publication of a gold standard review of 24 randomised trials conducted in 15 countries among more than 3,400 people worldwide, proving infections fall and deaths are dramatically reduced when ivermectin is administered,” BIRD Group said in a statement, referring to a study published on June 17 in the American Journal of Therapeutics.

Dr. Theresa Lawrie, co-author of the study, and founder of the BIRD Group, said ivermectin has already been “clearly proven” to work against COVID-19.

“In fact, there is more evidence on ivermectin than on any other treatment option for COVID, and far more safety data than any of the novel therapies,” she said.

The director of Evidence-Based Medicine Consultancy said the clientele of her company is composed of non-profit organisations including the WHO.

She said her analysis of data showed that COVID-19 patients who received ivermectin in the treatment trials had a 2 percent chance of dying, while the number for the control groups was 8 percent.

Asked how many people are typically needed for such clinical trials, Lawrie said it depends on the outcome.

“There’s no point saying ‘we want 3000 people’ if half the people die,” she told The Epoch Times in an interview.

“You’ve got ten deaths in the ivermectin group and 40 in the other group, you’ve already got a big difference. So you can’t keep on recruiting, you’re going to do an interim analysis. And that interim analysis is going to say, ‘hang on, we have to stop the trial, because there’re far more deaths happening in the control group,” she said.

Lawrie said her team was doing a trial sequential analysis, in which data are analysed as they are reported.

“We worked out that there were enough data in December when there were 1,810 people,” she said.

Lawrie said she initially submitted her review to the Lancet in mid-January, and peer-reviewers were satisfied that her work was worthy of publication before the journal decided not to publish it.

“In the letter to us, they said: ‘We have no doubt that this is an important paper and would be widely picked up.’ That was confusing to us as to why they chose not to publish it,” she said.

In an email to The Epoch Times, the Lancet said that “the Lancet group does not comment on papers we have not published.”

Lawrie also said that during a British ivermectin recommendation development group meeting in February, attending health professionals and patients stakeholders “virtually unanimously said ivermectin should be employed immediately for prevention and treatment [of] COVID” after she presented evidence her team had gathered, but authorities around the world—including the WHO and regulators from the UK, the United States, Canada have not responded to their communication.