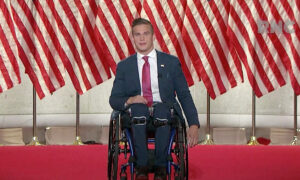 Young People Should Get Involved in Politics, Can’t ‘Wait in Line:’ Rep. Cawthorn

Youth should get involved in politics instead of adhering to the mentality of waiting their turn, the youngest member of Congress said Saturday.

“I believe that we’re starting to realize—this is why I got involved so young—is that we don’t have time to wait in line,” Rep. Madison Cawthorn (R-N.C.) told The Epoch Times’ “Crossroads” at the Conservative Political Action Conference in Orlando, Florida.

People would tell Cawthorn, 25, after he announced his bid for the U.S. House seat to represent North Carolina’s 11th Congressional District that he had the right principles and strong energy but that he should wait his turn.

“I physically looked around and said, ‘Who the hell are we in line behind,’ because whoever’s in front of us is giving us a country that’s on fire, and I don’t want to inherit that, and then only be able to put the fires out, then pass it on to my children,” Cawthorn said.

“No, I want to be able to build an empire, I want to be able to build infrastructure that is going to blow and boggle the minds of my children to where they can grow up in a world that is more prosperous, peaceful than we could ever imagine. And so I think you see young people getting involved, because we realize the threat that is existing, and that threat is that our country is being stolen from us.”

Cawthorn in a contested Republican primary last year triumphed over Lynda Bennett, a real estate agent who received an endorsement from former President Donald Trump and former Rep. Mark Meadows (R-N.C.), who held the seat she and Cawthorn were vying to win. Trump congratulated Cawthorn, who went on to beat the Democrat nominee, retired Air Force colonel Moe Davis.

Cawthorn since taking office has spoken out against socialism, in sharp contrast to young Democrats who often champion it, and told The Epoch Times that he believes every policy put forth by the left is “socialism with extra steps,” using healthcare as an example.

Another case, the congressman said, is the promise to forgive some student loans.

“It sounds sounds like you’re trying to get rid of student loans, we’ll never have to pay those again. But we both know that that just means we’re gonna have to pay extraordinarily high tax rates in the end, which means we’ll then be more and more dependent on the government to be able to sustain us and take care of us,” he added. “And again, that’s just socialism with extra steps. And so I think we have this thinly veiled movement towards—whether you call it communism or socialism—government control is on the rise, and it’s very dangerous.”

Cawthorn said the idea prevalent among some youth that socialism is good stems from poor public education.