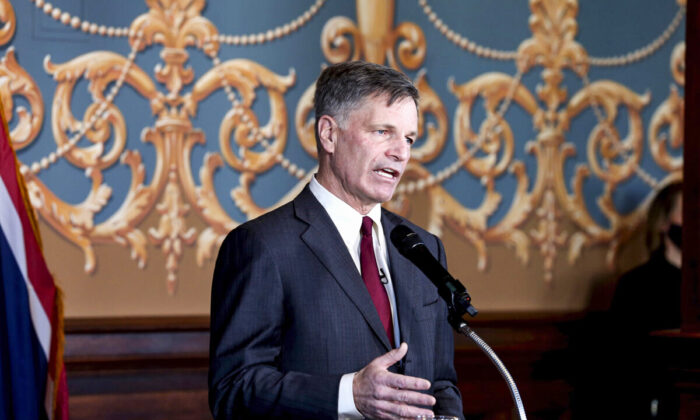 Wyoming lawmakers say they will next week hold a special session in Cheyenne to push back against the COVID-19 vaccine mandate announced by President Joe Biden last month.

According to the Casper Star-Tribune, a majority of the state House and Senate voted in favor of adding the rare special session to the legislative calendar. Republican lawmakers Rep. Chuck Gray, Rep. Landon Brown, and Rachel Rodriguez-Williams said that the necessary majorities for both houses had approved of convening the meeting, scheduled for Oct. 26 to Oct. 28.

Two bills being drafted as part of efforts to push against the president’s proposed vaccine mandate are sponsored by Republican Rep. Chuck Gray, of Casper, and would ban vaccine passports, and impose a $500,000 fine for firing, demoting, promoting, compensating, or refusing to hire employees based on vaccination status.

Another measure, sponsored by Republican Sen. Tom James, of Rock Springs, would impose fines and could result in a prison sentence for public servants who tried to enforce federal vaccine mandates.

It remains to be seen whether the session will proceed to discuss the legislation, as disagreement over rules could lead to adjournment at the outset, the Casper Star-Tribune reports.

A two-thirds majority vote in each chamber must be reached in order to approve rules for the session—something that has not been achieved by past votes, according to the news outlet.

“We will ask the respective majority floor leader to move for an immediate adjournment of the special session without considering any legislation,” Senate President Dan Dockstader, and Speaker of the House Eric Barlow, both Republicans, reportedly wrote in a memo dated Oct. 12.

Even if approved and signed into law by Gov. Mark Gordon, a Republican, such bills may lack legal force. The U.S. Constitution prohibits state statutes from superseding federal law.

Each day of the special session will reportedly cost the state roughly $25,000.

The president is yet to outline the specifics of his plan to mandate COVID-19 vaccination for federal workers, health care workers, contractors, and workers at businesses with over 100 employees, however, at least 19 governors, including Gordon, have publicly issued statements disagreeing with the administration’s move, with several vowing to defy it.

“I have asked the Attorney General to stand prepared to take all actions to oppose this administration’s unconstitutional overreach of executive power,” Gordon said previously of Biden’s vaccine mandate. “It has no place in America. Not now, and not ever.”

Officials for the White House didn’t immediately respond to a request for comment.