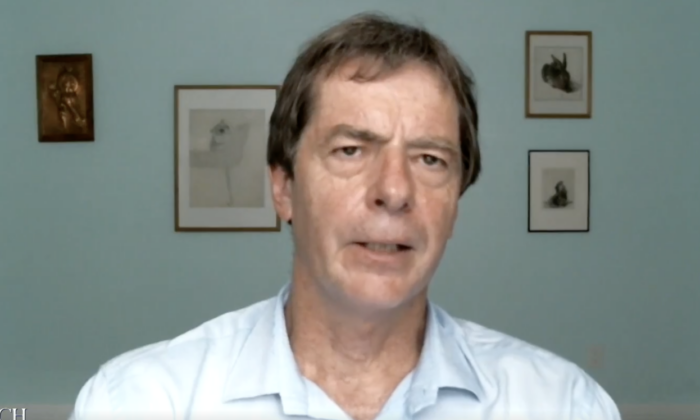 Former WHO official and expert in global health and infectious disease Dr. David Bell during an interview on American Thought Leaders. (The Epoch Times)
International

WHO Pandemic Treaty Will Effectively Take Away Countries’ Sovereignty: Former WHO Scientist

A former World Health Organization (WHO) scientist, Dr. David Bell, said he is concerned about the proposed amendments to the U.N.’s 2005 International Health Regulations (IHR), also being called the pandemic treaty or pandemic accord. Bell said if ratified, the treaty would give power to a small group of WHO officials and effectively take away the sovereignty of countries around the globe.

“There are a lot of ways that even though it doesn’t directly change sovereignty, in effect it does, it takes away the ability of the people of that country to make their own decisions,” Bell said during an interview with EpochTV’s American Thought Leaders program.

Bell is the former program head for malaria and febrile diseases at the Foundation for Innovative New Diagnostics (FIND) in Geneva and director of Global Health Technologies at the Intellectual Ventures’ Global Good Fund. He is currently on the board of Pandemics Data & Analytics (PANDA), a group studying the world’s response to COVID-19.

Amendments to the IHR were considered in the initial draft (pdf) of the global pandemic treaty by the World Health Assembly on May 22–26 and the final draft will need to be passed by 50 percent of member countries next year, then the treaty will need to be ratified by individual governments in two-thirds of the WHO member countries.

Ranking Member of the House global health subcommittee, Rep. Chris Smith (R-N.J.) warned that the potential changes to IHR, specifically the ones the Biden administration is seeking, will undermine U.S. sovereignty.

“The Biden Administration’s absurd proposal to surrender U.S. sovereignty to the corrupt World Health Organization (WHO) is an egregious breach of the constitutional principle that will lead to less accountability and more misconduct by this problematic UN agency,” Smith said in a press statement.

President Joe Biden’s administration is pushing amendments that would give WHO Director-General Tedros Adhanom Ghebreyesus unilateral authority to declare a public health emergency in any nation based on whatever evidence he chooses.

Among the proposed U.S. amendments, one removes an existing requirement in Section 9 that WHO “consult with and seek to obtain verification” from officials in a nation in which a health crisis is suspected before making any public declarations.

On the first day of the 75th Plenary session of the World Health Assembly, May 22, Ghebreyesus called the potential treaty an important part of the “global architecture for health emergency preparedness.”

“The international accord, which member states are now negotiating, will provide a vital overarching legal framework under which we make 10 recommendations in three key areas. First, we need governance that’s coherent, inclusive, and accountable. Second, we need stronger systems and tools to prevent detect and respond rapidly to health emergencies. And third, we need adequate and efficient financing domestically and internationally.”

Bell said the power the treaty gives the Director General (DG) and the regional directors would be destructive to nations’ sovereignty because these WHO officials would have power over countries’ own institutions.

“It has huge implications for trade and economies and we’re giving power to a person and an emergency committee which the DG consults with which has been set up under the IHR amendments, but [the DG] is not required to go with that committee’s findings. He can override that committee and still declare a public health emergency if he or she thinks they should,” said Bell.

In addition, Bell is concerned that private corporations would be contributing billions of dollars to the WHO and pandemic initiatives, and private donors could influence the DG or regional directors. These donors could influence, “essentially the issues that have a huge impact on the health and freedom of people and populations,” said Bell.

Not only does the treaty give too much power to the DG but it could advantage certain countries, said Bell.

The WHO “certainly is pushing a very new way of managing health and of managing decision making in health, particularly in outbreaks that is clearly to the advantage of these donors of WHO. That is also potentially, because of the harm it seems to be doing to economies and democracy, is potentially to the advantage of certain countries within the WHO as well,” said Bell. “So it would be strange if countries weren’t taking advantage of this whole situation to further their strategic interests over the interests of rival countries.”

The funding shift became clear during March of 2020 because orthodox public health response policies were being abandoned in dealing with COVID, and lockdowns were employed despite the unintended costs. Orthodox policies look at the cost-benefit analysis, including societal and mental health, but the COVID lockdowns caused more harm than good, said Bell.

Traditional public health norms do not include lockdowns because public health professionals know there are unintended costs to locking down populations, especially for extended periods of time.

Bell said he is most concerned about the fact that the pandemic treaty will put into place a periodic review mechanism, which would review countries’ pandemic preparedness to see if they’re complying with the IHR recommendations.

“It sounds as if it will look at having some powers over censorship and control of information, which again is extremely difficult if you’ve got a bureaucracy whose existence is dependent on pandemics, because they’ll have a very vested interest in finding outbreaks, declaring them potential pandemics and then responding. It’s the way that they will survive.”

Pandemics happen infrequently, and “apart from the pre-antibiotic era have had very low mortalities,” said Bell.

Bell thinks the treaty will “make lockdowns, essentially, it seems, a permanent feature of pandemic responses.”

Due to the recent lockdowns, “140 million people or more have been added to people on the edge of starvation,” as well as lack of medical care, damage to supply chains, education, and economies. Bell said if lockdowns are reinstated, it will only compound these problems.

It is also strange that the WHO would be setting up a bureaucratic structure that would usurp power from governments regarding “health emergencies” when pandemics do not naturally occur that often, said Bell.

If the pandemic treaty is approved by the World Health Assembly, “We’re looking at a bureaucracy whose existence will be dependent on surveilling to try to find virus outbreaks, doing modeling which could suggest … there’ll be exponential growth, which is not really biologically plausible. And then that will be used to ensue pandemics, to close borders, to do these things,” said Bell.

The response to the COVID outbreak was not normal and contrary to what is best for public health because it focused on pharmaceuticals, Bell said. He thinks the increased funding from private donors and Big Pharma will result in similar responses to future “health emergencies” declared by the DG.

“So, if you look at this from a business point of view … It’s a very sensible business strategy,” said Bell. “You concentrate on selling the product for the disease that they have.”

This deep private interest has changed the WHO and its public health policies, according to Bell.

Bell said that the IHR amendments and draft of the pandemic treaty talk about the “threat” of a pandemic and the private sector would be gathering the data and developing models to determine this “threat.”

“Importantly, [the definition of a pandemic] … doesn’t include severity. It’s a very loose definition, it’s not clearly defined within the WHO, but it is essentially [the] wide spread of a pathogen, a virus, or bacteria. It doesn’t have to kill people. It doesn’t have to be severe. It just has to be widespread.”

The same private funders who are funding the WHO projects are funding training schools in colleges and universities in North America and Europe said Bell.

“This is training the people who work in these organizations. They’re funding the research for a lot of these diseases … and are funding modeling groups,” like the ones in the Imperial College in London and the Institute for Health Metrics and Evaluation at the University of Washington in the United States said Bell.

“But in the end, it means that one person or one very small group of individuals is extremely influential,” said Bell.

Bell suggests that readers contact their representatives and ask questions, about public health, the structure and policies of public health, and where conflicts of interest lie, so that countries can make rational decisions “that our population-based, not profit base.”

Correction: Dr. Bell’s former association with the WHO has been clarified. The Epoch Times regrets the error.