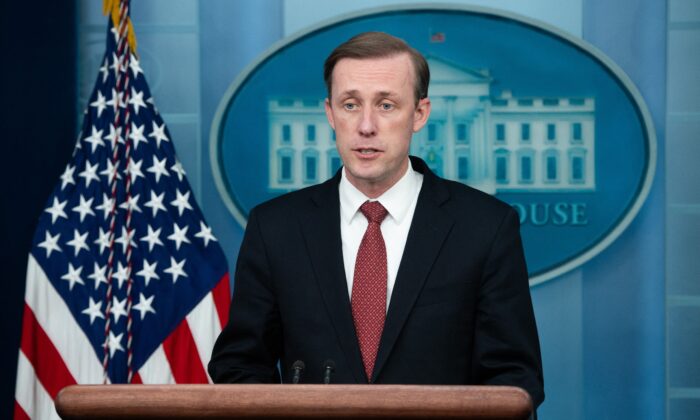 U.S. national security adviser Jake Sullivan speaks during the daily briefing in the Brady Briefing Room of the White House in Washington, on Feb. 11, 2022. (Saul Loeb/AFP via Getty Images)
By Jack Phillips

White House national security adviser Jake Sullivan on Sunday issued a warning to the Kremlin following recent statements by top Russian officials regarding the possible use of nuclear weapons.

“Let me say it plainly: If Russia crosses this line, there will be catastrophic consequences for Russia,” Sullivan said on NBC’s “Meet the Press” on Sunday.

“This is not a bluff,” Putin said during his speech. “And those who try to blackmail us with nuclear weapons should know that the weathervane can turn and point towards them.”

But if nukes are used, the United States will respond, Sullivan warned. He did not elaborate.

“The United States will respond decisively,” Sullivan said Sunday. “Now, in private channels, we have spelled out in greater detail exactly what that would mean, but we want to be able to have the credibility of speaking directly to senior leadership in Russia and laying out for them what the consequences would be without getting into a rhetorical tit for tat publicly.”

President Joe Biden in a speech at the United Nations General Assembly in New York on Wednesday accused Russia of making “overt nuclear threats against Europe” in reckless disregard for nuclear nonproliferation responsibilities.

Russia also is staging a referendum in four eastern Ukrainian regions with the goal of annexing territory that Russian forces have taken during their invasion of Ukraine launched in February. Ukraine and its allies have called the referendums a sham designed to justify an escalation of the war and Putin’s mobilization drive after recent battlefield losses.

By incorporating the areas of Luhansk, Donetsk, Kherson, and Zaporizhzhia into Russia, Moscow could portray attacks to retake them as an attack on Russia itself, a warning to Ukraine and its Western allies.

On CBS News’ “Face the Nation,” Ukrainian President Volodymyr Zelenskyy claimed that Ukrainians who won’t vote in the referendum could face retaliation.

“Russians can turn off their electricity and won’t give them an opportunity to live a normal human life,” Zelenskyy said. “They force people, they throw them in prisons. They force them to come to these pseudo-referenda. And also, they also announced mobilization [of 300,000 reservists.] They’re forcing people to fight, people from the temporarily occupied territories.”