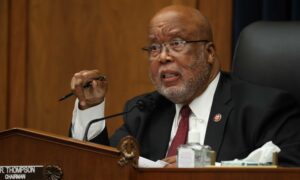 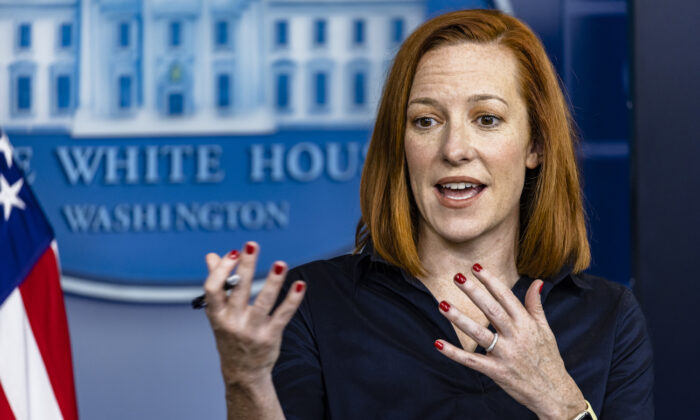 White House spokesperson Jen Psaki said on March 5 that the $1.9 trillion relief package—panned by Republicans as a liberal wish list packed with non-pandemic-related spending priorities—is an “incredibly progressive bill,” and expressed the expectation that congressional progressives will give it their stamp of approval when the bill circles back to the House.

Psaki made the remarks at a White House press briefing in response to a question about how the demands of moderate Democrats were forcing a series of compromises on the bill, as it makes its way through the Senate, that might rankle the Democratic Party’s progressive wing. These include lowering the federal unemployment benefit add-on from $400 to $300, and tightening thresholds for who is eligible to receive stimulus checks.

Late March 5, Senate leaders and moderate Sen. Joe Manchin (D-W.Va.) struck a deal over the extra jobless benefits, breaking a logjam that had stalled the party’s showpiece $1.9 trillion COVID-19 relief bill. Manchin, who was at the center of an hours-long holdup, eventually threw his support behind the deal, clearing the way for the Senate to begin a climactic, marathon series of votes and, eventually, approval of the sweeping legislation.

The reporter asked Psaki: Is President Joe Biden “concerned at all about losing progressives once this bill goes back to the House? And is there anything that he’s looking to do to cater to some of those more progressive demands?”

Psaki replied by saying that, despite the changes, “this is an incredibly progressive bill,” and outlined how the unemployment benefit compromise which, while lowering the size of the payout to $300, extends the disbursement period from August to September and makes the first $10,200 of jobless benefits tax-free, providing more relief to the unemployed than the current legislation.

“It’s different person to person, of course, but on average it would provide more relief,” Psaki said. “So that sounds pretty progressive to me.”

She said it cuts child poverty in half, chiefly by expanding the child tax credit. The bill also includes tens of billions of dollars for renters’ and homeowners’ assistance, which Psaki said “will benefit lower-income, disproportionately black and brown renters and homeowners.”

There is also money to ramp up vaccinations and support the reopening of schools.

“Reopening schools and schools being closed has a disproportionate impact on lower-income communities,” Psaki said. “Those are progressive proposals, progressive ideas, and a $1.9 trillion package is certainly a progressive-sized package.”

She said the White House is hopeful that the progressive members of the House will support the bill when it circles back for their seal of approval.

Other compromises in the Senate version of the bill, compared to the House version, include tighter eligibility for the $1,400 direct payments, axing of the $15 federal minimum wage, and caps on money for state and local governments.

A Republican bugbear, state and local funding remains at a whopping $350 billion, but adds a compromise stipulation that the money can only cover costs incurred by the end of 2024. The Senate version of the bill also prohibits states from using the money to offset tax cuts and stipulates that it cannot be used to shore up pension funds, with lawmakers generally looking to focus the funds on covering costs and revenue shortfalls arising from the pandemic.

The Senate version of the bill also provides more money to hospitals and raises a health insurance premium subsidy for company health plans from 85 to 100 percent, ensuring that laid-off workers can remain on their employer health plans at no cost through the end of September.

It also makes COVID-19 student-loan relief tax free and provides an additional $510 million for homeless services under the Federal Emergency Management Agency, and $175 million for the Corporation for Public Broadcasting.

The bill passed in the Senate on March 6; it will now need the House to sign off on the amendments before Biden can sign it into law.

Democrats are looking for the bill to be signed before March 14, when enhanced unemployment benefits and some other aid are due to expire.

Republicans have denounced the $1.9 trillion relief package for provisions unrelated to the pandemic and have panned parts of the bill as a “liberal wish list.”

Just before the bill passed the House last week, House Minority Leader Kevin McCarthy (R-Calif.) took aim at its bevy of non-COVID-19-related spending, alleging that it caters to “special interest allies” and proclaiming that “the swamp is back.”