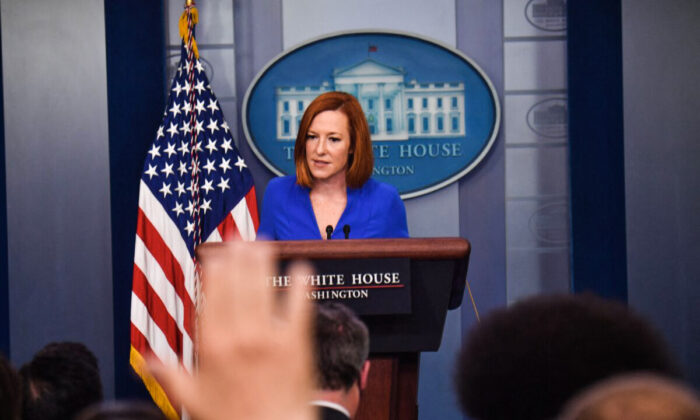 White House press secretary Jen Psaki said on Oct. 15 that she’ll be more careful with her words after a watchdog group accused her of violating the Hatch Act during a press briefing.

“While the president has publicly expressed his support for McAuliffe, we’ll leave it to the press and the campaign to provide commentary on the race,” Psaki said in a statement to news outlets. “I take ethics very seriously and will choose my words more carefully moving forward.”

“We’re going to do everything we can to help former Gov. McAuliffe, and we believe in the agenda he’s representing,” Psaki told reporters in Washington this week.

Citizens for Responsibility & Ethics in Washington (CREW) filed a complaint to the Office of Special Counsel over the comment, alleging that it appeared to endorse McAuliffe’s candidacy and run counter to the Hatch Act.

The act bars any employee of the Executive Branch from using their “official authority or influence” for the purpose of interfering with or influencing an election result.

“There is also little doubt that Ms. Psaki’s statements were aimed at the success or failure of a candidate in a partisan election,” the complaint says.

“We hope the Biden administration will give renewed attention to staying on the right side of this law,” CREW President Noah Bookbinder said in a statement.

CREW typically targets Republicans and filed a series of Hatch Act complaints against officials during the Trump administration, including McEnany.

The Office of Special Counsel found that Kellyanne Conway and Peter Navarro, two Trump administration officials, violated the act in comments they made.

Another Biden administration official, Housing Secretary Marcia Fudge, was accused of violating the act earlier this year when she talked about two Democrats running for a U.S. Senate seat representing Ohio.