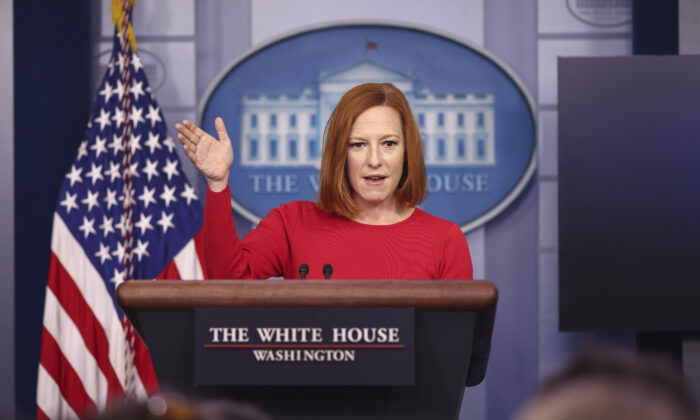 White House press secretary Jen Psaki confirmed Tuesday that the Biden administration has been flying unaccompanied children from the southern border to New York in the middle of the night.

According to the New York Post, about 2,000 underage illegal immigrants from Texas allegedly have arrived at the Westchester County Airport on 21 flights since Aug. 8, before they were being bused to the Bronx, Brooklyn, Queens, Long Island, upstate Newburgh, New Jersey, and Connecticut.

Some of the fights landed between midnight and 6:30 a.m. when a voluntary curfew was enacted by the airport. The news outlet witnessed last week two flights landing at the airport at 9:52 p.m. and 10:49 p.m. respectively, and most of the passengers who got off appeared to be children and teens, with a small portion appearing to be men in their 20s.

“Well, here we are talking about early flights—earlier than you might like to take a flight,” Psaki responded to a question during her Tuesday briefing. “It is our legal responsibility to safely care for unaccompanied children until they can be swiftly unified with a parent or a vetted sponsor. And that’s something we take seriously. We have a moral obligation to come to do that and deliver on that.”

Psaki confirmed that the unaccompanied kids are not only being transported to New York but other parts of the country as well.

“As a part of the unification process, our Office of Refugee Resettlement facilitates travel for children in its custody to their families or sponsors across the country,” Psaki continued. “So, in recent weeks, unaccompanied children passed through the Westchester airport, which I think is what you’re referring to, en route to their final destination to be unified with their parents or a vetted sponsor.”

The Biden administration has faced growing criticism for the southern border crisis—U.S. Customers and Border Protection (CBP) reported over 1.5 million encounters at the southern border during the fiscal year 2021, even without September’s data. Among them, over 130,000 are unaccompanied minors.

The Biden administration has been struggling to accommodate the explosion of unaccompanied children—expanding current facilities, renting hotels, and busing them to different states.

“We’ve done our best to get the information from the government but we’ve really been stonewalled,” Miranda Devine, one of the reporters of the New York Post’s story, told Fox News’ Tucker Carlson Tonight. “We’ve referred to the Health and Human Services (HHS) and all they will say or the White House will say is that—they have an obligation to look after unaccompanied children. And that’s what they’re doing. But they don’t explain why they’re doing it in the dead of night. Why is this such a secret operation? Why is no one talking about it?”

“The flights are carried out in secret, in the dead of night, because they know their clandestine alien smuggling operation is wildly indefensible,” Stephen Miller, former adviser to President Donald Trump, wrote on Twitter Tuesday.

HHS hasn’t immediately responded to a request from The Epoch Times for comment.