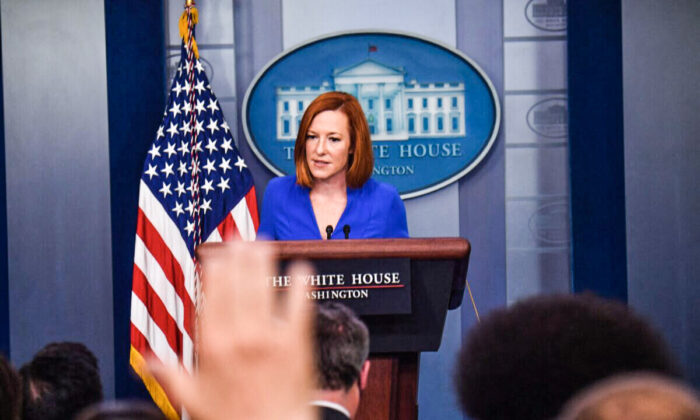 The White House is backing comments President Joe Biden made over the weekend regarding the Jan. 6 protests at the U.S. Capitol.

Biden told reporters in a South Lawn gaggle Oct. 15, he thinks the U.S. Justice Department (DOJ) should prosecute people who defy subpoenas to testify before a U.S. House select committee probing the events of Jan. 6.

“I hope that the committee goes after them and holds them accountable,” Biden said of those defying the subpoenas.

Asked whether he believed the Justice Department should prosecute them, Biden told reporters: “I do, yes.”

When Fox News asked Oct. 18 why Biden seemed to break his promise not to enter into any decisions about what cases the DOJ should bring, or not bring, White House press secretary Jen Psaki reiterated a tweet she had put out Oct. 15.

Biden also made the non-interference pledge repeatedly on the campaign trail.

In response to Biden’s Oct. 15 comments, DOJ spokesman Anthony Coley said: “The Department of Justice will make its own independent decisions in all prosecutions based solely on the facts and the law. Period. Full stop.”

Former president Donald Trump is fighting to keep secret records from his presidency requested by the congressional committee, citing executive privilege in a letter sent to the National Archives and Records Administration on Oct. 8.

A pair of letters sent Oct. 8 and Oct. 9, from White House counsel Dana Remus to the Archivist of the United States, have indicated the Biden administration wants the committee to have access to the documents.

The first Remus letter reads: “President Biden has determined that an assertion of executive privilege is not in the best interests of the United States, and therefore is not justified as to any of the documents.”

The congressional committee plans to vote Oct. 19 on adopting a contempt of Congress report against Steve Bannon, a former Trump adviser who has not complied with the committee’s subpoena. Former Trump administration officials Kash Patel and Mark Meadows have also been subpoenaed, but are said to be engaging with the committee.

If the committee approves the contempt case against Bannon, it would go to a full House vote. From there, the Justice Department and Attorney General Merrick Garland would decide whether to pursue prosecution.