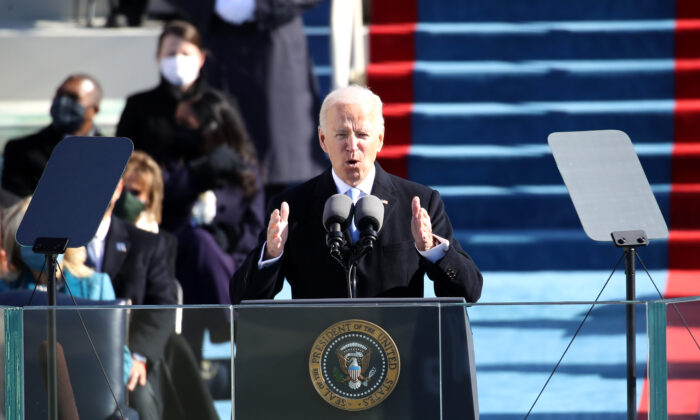 President Joe Biden delivers his inaugural address on the West Front of the U.S. Capitol in Washington on Jan. 20, 2021. (Rob Carr/Getty Images)
Viewpoints

You can’t say he didn’t warn us. It’s true that, in his inaugural address, President Joe Biden’s call for “unity,” coming as it did after a period of great civil strife and contention, sounded like a promise. It’s only taken us nine months to discover that the promised unity was really a threat.

You may remember that, having cited the “challenges” to the nation of the pandemic and its economic consequences, the alleged 400 years’ deferral of racial justice, the alleged clearly audible “cry for survival” from planet earth, and the alleged rise of (right-wing) political “extremism,” Biden went on to say the following:

“To overcome these challenges—to restore the soul and to secure the future of America—requires more than words. It requires that most elusive of things in a democracy: Unity.”

Now we know why he didn’t mention the reason why “unity” is “that most elusive of things in a democracy.” It’s that democracy is built on the assumption of disunity and is nothing but a fantasy, a buzz word, without it. If the nation were truly united, there would be no need to count votes. Our leaders would be elected by acclamation.

Democracy is our way of dealing peacefully with the permanent state of division and discord and disunity in which we find ourselves, just as our ancestors who designed the American democracy did. We agree to allow the most numerous of the divided segments of our population to choose those who will be in charge of us all.

But we do not live in a pure democracy and never have. There are protections built into our system—the separation of powers, for instance—to prevent the majority faction from tyrannizing over the minority.

These protections, like voting itself, would be unnecessary if there were unity.

Even in war-time, when the nation is under existential threat, the necessary unity in opposing an external enemy is limited to unity against that threat. A greater unity than that—a unity on all the inevitably contentious issues of the day—will always be beyond our reach.

Unless, by rhetorical legerdemain, some demagogue can persuade people that all those contentious issues mentioned by the President in January—how to deal with the pandemic and resulting economic disruption, how to achieve racial justice, how to ensure the survival of the planet, and how to deal with extremists—are really existential threats in disguise.

Unless he can persuade them that these things will destroy us as a nation if we don’t oppose them as we would any external enemy: with resolution and a unified will of all Americans.

Unless, too, by further linguistic trickery, he can persuade people that this marshaling of one half of America to cancel the other half as a threat to its existence is somehow consistent with “democracy.”

For on the whole, people are pretty well satisfied with our American democracy and with the way it has functioned for the last 232 years. It won’t do to tell them that you’ve decided to trade in the old democratic-republican jalopy for a sleek new roadster called “Unity.”

That’s why Mr. Biden began the same speech with the curious tautology that his presence on the inaugural stage meant that “democracy” had triumphed.

As if that statement could mean anything but the obvious: “I got more votes than that other guy.”

Well, if we didn’t know it before we know now what he really meant. We know now what this administration and its many friends in the media mean by the word “democracy.” They mean “rule by Democrats.”

Here are a few headlines that have appeared in recent weeks:

Only in the last of the examples above do the alleged threats threaten democracy as traditionally understood: rule by the majority.

And even there, author William Saletan sees former President Trump as only the local incarnation of an international “authoritarian” threat, even if he was legitimately elected.

His main gripe, however, is against Trump’s continual repetition of his claim that the election of 2020 was fraudulent.

But if he genuinely believes that the election was stolen, doesn’t that mean that—according to his own lights anyway—he is working harder than ever to restore, not to undermine democracy?

Saletan obviously disagrees with him, but that doesn’t automatically give him the right to speak for “democracy.” His language is not that of rational argument and is no less stridently partisan than that of any Trump-sympathizing “extremist.”

“Democracy” is also said to be under threat from laws passed by Republican-majority state legislatures to ensure the security of elections—so that those not legally eligible to vote don’t vote, or that eligible voters don’t vote more than once.

“These dangerous Republican moves to take away voting rights threaten our democracy and the rights and freedom of every American, and must be met with a new national voting rights campaign like the one Dr. Martin Luther King led in the 1960s,” writes Donna Brazile in USA Today.

If what Republicans intend to be reasonable measures to protect democracy are considered as threats to democracy—because they might depress Democratic vote totals arrived at by more dubious means, such as postal voting and ballot harvesting—you can be pretty sure it’s not really democracy they’re talking about.