Brother of George Floyd Criticizes Violent Protesters: 'Do Something Positive'
0 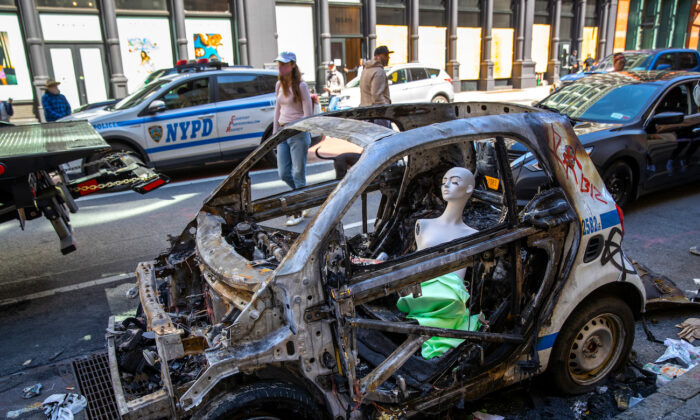 A mannequin sits in a burned police vehicle in the Soho neighborhood of Manhattan in New York City, N.Y., on June 1, 2020. (John Moore/Getty Images)
US News

Officials in New York, Chicago, and other cities say they have seen evidence suggesting that organized groups sought to incite violence at the recent weekend protests sparked by the death of George Floyd.

New York’s top terrorism official, Deputy Commissioner for Intelligence and Counterterrorism John Miller, told reporters on Sunday that there was a high level of confidence within the NYPD that unnamed coordinated groups had organized roles such as scouts and medics, as well as equipment such as supplies of rocks, bottles, accelerants for breakaway groups to commit vandalism and violence.

“Before the protests began, organizers of certain anarchists groups set out to raise bail money and people who would be responsible to be raising bail money, they set out to recruit medics and medical teams with gear to deploy in anticipation of violent interactions with police,” Miller said, according to NBC New York.

He added that the groups sought to damage property “only in wealthier areas or at high-end stores run by corporate entities.” The groups also had a “complex network of bicycle scouts to move ahead of demonstrators in different directions” to help determine where police were located, so as to help direct people of the group to areas to commit acts of vandalism, where they believed law enforcement officials would not be present.

Miller also said that about one out of every seven arrests—of the 686 arrests since May 28 in New York—has been from out of state, and that they were from Massachusettes, Connecticut, Pennsylvania, New Jersey, Iowa, Nevada, Virginia, Maryland, Texas, and St. Paul, Minnesota, according to the news station.

Attorney General William Barr warned on May 30 that “it is a federal crime to cross state lines or to use interstate facilities to incite or participate in violent rioting.”

One witness told the New York Post that hundreds of looters “have been going systemically from store to store.” The outlet reported that the upscale Soho neighborhood in Lower Manhattan appeared to be the worst hit on Sunday evening.

In Chicago, Mayor Lori Lightfoot told a news conference on Sunday that she believed there is “no doubt” that organized groups have tried to take advantage of the peaceful protests in the city, Crain’s Chicago Business reported.

“There is no doubt—this was an organized effort last night,” she said. “There were clearly efforts to subvert the peaceful process and make it into something violent.”

“There’s no question that both the people who were fighting and brought the weapons, that was absolutely organized and choreographed,” Lightfoot added. “It seems also clear that the fires that were set, both of the vehicles and buildings, that that was organized and that was opportunistic, as well as the looting.”

Lightfoot did not single out any specific incidences, but said that there were instances where a group would break into and loot businesses, and load the goods into a U-Haul vehicle, or “caravans” or cars, and sometimes also set fires.

Lightfoot said she has reached out to the FBI, the Bureau of Alcohol Tobacco Firearms & Explosives (ATF), and the U.S. Attorney’s office for help in investigating the situation, with a focus on the ATF’s bomb and arson unit.

Federal, state, and local authorities in Minnesota also recently expressed concerns that people from outside of the state have incited and participated in the violence alongside peaceful protests about Floyd’s death.

In Minneapolis on Sunday, State Public Safety Commissioner John Harrington said that officials found several caches of flammable materials—some of which looked like they may have been planted days ago—in neighborhoods where there have already been fires, reported the Minneapolis Star-Tribune.

Police have found stolen vehicles with number plates removed that were used to transport the flammable materials. They also found stolen goods and weapons in the cars, Harrington added.

“The fact that we’ve seen so many of them in so many places now makes us believe that this is part of that pattern that shows that this is in fact an organized activity and not some random act of rage,” he said, according to the newspaper.

President Donald Trump on Sunday praised the National Guard in shutting down unrest and chaos in Minneapolis that he said was guided by “ANTIFA-led anarchists, among others.” Trump has said that his administration will designate Antifa as a terrorist organization.

Floyd was pronounced dead on May 25 after he was taken into police custody in Minneapolis on the same day. The 911 call that drew police to Floyd described a man suspected of paying with counterfeit money. He was “awfully drunk and he’s not in control of himself.”

Disturbing video footage on the day showed a police officer using his knee on Floyd’s neck to pin him to the ground. Floyd, who was unarmed and handcuffed, pleaded to the officers while repeatedly calling out “I can’t breathe” during the episode.

A local medical examiner from Hennepin County in downtown Minneapolis on Monday classified Floyd’s death as a homicide.