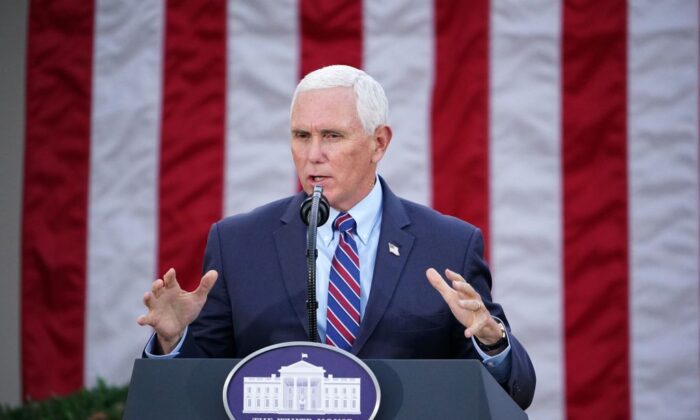 Vice President Mike Pence in the Rose Garden of the White House in Washington on Nov. 13, 2020. (Mandel Ngan/AFP via Getty Images)
Viewpoints

Vice President Pence Must Be Guided by the 12th Amendment, Not the Electoral Count Act, on Jan. 6

On Monday, I wrote on these pages that Vice President Mike Pence, as president of the Senate, would be violating his oath of office were he to count the electoral votes cast for Joe Biden in the six disputed swing states—Michigan, Wisconsin, Pennsylvania, Georgia, Arizona, and Nevada—because the governors of those states had “certified” the Biden-pledged electors, despite a demonstrably fraudulent election, and in contravention of the wishes of some state lawmakers, which had sent Trump-pledged electors who cast “dueling” votes for President Trump at the Dec. 14 Electoral College.

I referenced a recent case brought by the Amistad Project in the D.C. federal court, which argued that the federal and state statutes allowing the governors to certify electoral votes over the objections of the state lawmakers were unconstitutional and as such void, in that Article II (containing the “Electors Clause”) grants the “exclusive and non-delegable” power to the state legislatures (not the state executive branches) to decide the “manner” of choosing a state’s presidential electors.

The U.S. Supreme Court has expressly held that the power granted to the state legislatures by the Electors Clause is “plenary,” “exclusive,” and may not be “abdicated.”

Unbeknown to me at the time, as I was writing that commentary, another suit was being filed. This one, brought by Republican Texas Congressman Louie Gohmert and the entire slate of Trump-pledged electors for Arizona, was filed in a Texas federal court (pdf), and assigned to Judge Jeremy Kernodle, a Trump appointee.

Whereas the Amistad suit contends that the state and federal election-procedure statutes violate the Electors Clause—by imbuing the governors with power that belongs solely to the state legislatures—the Gohmert suit, conversely, contends that the Electoral Count Act of 1887 contravenes the 12th Amendment—by imbuing (federal) senators and representatives with power that belongs, in the first instance, solely to the vice president, and, once a dispute emerges, solely to the House of Representatives.

State Lawmakers Choose Electors; the Vice President Determines If There’s a Dispute; the House Resolves the Dispute by a Contingent Election

That is, while the Amistad suit claims that various federal and state statutes unconstitutionally grant power to the governors, over choosing electors who cast their votes at the Electoral College (which took place this year on Dec. 14)—even though that power is granted exclusively, and on a non-delegable basis, to the state legislatures by Article II—the Gohmert suit concerns the electoral process at a later juncture, namely the Jan. 6 joint session of Congress, at which the electoral votes are “opened” and “counted.”

Under the 12th Amendment, the vice president, in his constitutionally prescribed role as president of the Senate, is granted the sole power to “open” the electoral vote certificates and “count” them at the joint session of Congress, this year scheduled for Jan. 6.

Pence will be faced with dueling electoral votes for the six disputed swing states, a Biden slate from the governors, and a Trump slate from the lawmakers. The six disputed swing states account for 79 electoral votes. Not counting them, Trump stands at 232 and Biden at 227. Thus, the disputed votes are sufficient to make either candidate a winner, if they are counted, or neither candidate a winner, if they are not counted, since in the latter case neither candidate will reach 270 votes (though in that case Trump would have a majority of the votes counted).

A Contingent Election in the House

The 12th Amendment sets forth a procedure for resolving a disputed election where neither candidate achieves a majority of electoral votes. In that case, a “contingent election” is held by the House: “the House of Representatives shall choose immediately, by ballot, the President. But in choosing the President, the votes shall be taken by states, the representation from each state having one vote …”

Thus, if Pence were to “open” and read the electoral votes cast by both of the competing slates of electors from the six swing states, and choose “not to count” either set—in light of the conflict—the House of Representatives would immediately vote to determine the winner, with each state getting one vote. Given that a majority of states are GOP-controlled (although the Democrats control a greater number of representatives), Trump would prevail.

However, if the objection doesn’t carry in either or both houses of Congress, then the ECA further provides that the slate certified by the governor controls, in which case the dispute is thus resolved, and a contingent election never takes place.

First, while the 12th Amendment grants no role whatsoever to the Senate, the ECA grants the Senate equal control over objections, as they must pass the Senate and the House.

Second, the ECA provides that in the absence of objections passing in both houses, the slate certified by the governor of the state controls. This is nowhere provided in the 12th Amendment.

Third, by providing for governor-certified slates to be counted even if there are dueling slates of electors—absent objections passing in both houses of Congress—the ECA eliminates and replaces the contingent election procedure set forth in the 12th Amendment, because by virtue of counting the governor-certified slates, the dispute is resolved (though not in the manner set forth in the Constitution, i.e., the 12th Amendment), and never reaches the House (for a contingent election).

Besides violating the 12th Amendment, the ECA also violates Article II, the Electors Clause, because it gives the final say over electors to the state’s executive branch (its governor) while Article II grants that power exclusively, and in a non-delegable way (according to the U.S. Supreme Court), to the state legislatures.

For these reasons, Gohmert in his suit, proceeds against Vice President Pence, asking for a declaratory judgment and order that directs Pence to proceed in accordance with the Constitution, as reflected in the 12th Amendment, and not pursuant to the contrary, unconstitutional, procedures set forth in the ECA.

The Gohmert suit presents an odd situation. Powerful allies of the president—Rep. Gohmert and the Arizona Trump-pledged electors—are suing the vice president, the president’s running mate. Nor is the suit only directed against Pence as a theoretical or legal matter to add a necessary party.

As The Epoch Times reported, Gohmert’s counsel “made a meaningful attempt to resolve the underlying legal issues by agreement, including advising the Vice President’s counsel that Plaintiffs intended to seek immediate injunctive relief in the event the parties did not agree. Those discussions were not successful in reaching an agreement and this lawsuit was filed. Counsel for the Vice President was promptly furnished a copy of the Complaint and Plaintiffs Motion.”

This leaves the public with an unclear picture on the vice president’s position. Possibly, the vice president intends to follow the ECA, in which case, because the objections will never pass both houses, the “governor-certified” slates will be counted and Biden will win despite the allegations of horrific election fraud. And even though doing so plainly violates the 12th Amendment, which means the vice president, in following the ECA, will be violating his oath of office.

However, it’s possible the lawyers could simply not reach a precise agreement, or that the vice president did not want to be bound to a particular course of action, in advance, and preferred to have a court rule before Jan. 6—taking the vice president off the proverbial hot seat, so to speak.

Hopefully, the vice president adheres to his oath of office and refuses to “count” either slate of disputed electors, thus sending the matter to the House for a “contingent election” as the 12th Amendment requires.

I realize the vice president may have further political ambitions, but it would be a tragic mistake to place those personal ambitions above the Constitution, his solemn oath, and the future of the Republic.

Personally, I think the vice president fulfilling his oath and honoring the Constitution and his future political ambitions are perfectly aligned.