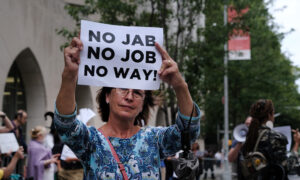 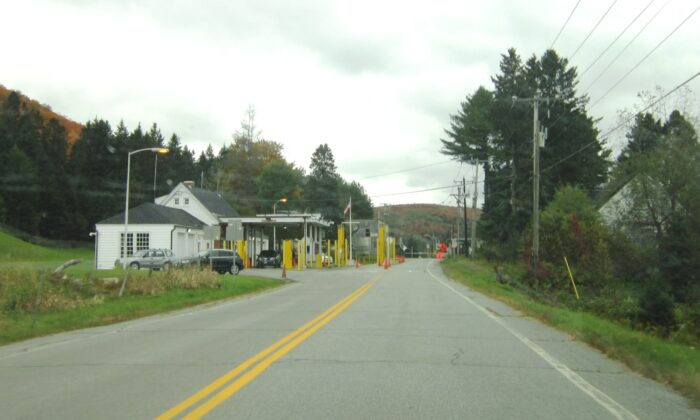 The U.S.–Canadian border crossing at Canaan, Vermont, in a file photo. (Wharon via Wikipedia/CC BY-SA 3.0)
Judiciary

Evidence seized by U.S. Customs and Border Patrol (CBP) agents in a warrantless vehicle search near the international border with Canada cannot be used in state prosecutions, a divided Vermont Supreme Court ruled on Sept. 24.

Article 11 of the Vermont Constitution, which “protects individuals from unreasonable searches or seizures ‘by any officer or messenger,’” guarantees “individuals the right to privacy in their vehicles and to containers within those vehicles,” Justice William D. Cohen wrote for the court in the 3–2 decision.

Justice Karen Carroll authored the dissenting opinion, which Justice Harold Eaton Jr. joined. They held that the court’s majority opinion conflicted with case law from Vermont and other jurisdictions.

Defendants Phillip Walker-Brazie and Brandi-Lena Butterfield were in a car on Aug. 12, 2018, driving to their home in Richford, Vermont, when a border patrol officer pulled the vehicle over in a remote area about 2 miles from the U.S.–Canada border, which is used to smuggle people and drugs. Such officers conducting roving patrols near the border are authorized by federal law to carry out warrantless searches, Cohen wrote in the court opinion.

The officer smelled a strong odor of marijuana coming from the car and thought the occupants seemed nervous. The defendants denied the officer permission to search the vehicle, but other border patrol agents subsequently searched the car. They discovered and seized marijuana and a bag of hallucinogenic mushrooms. The feds gave the evidence to the Vermont State Police, and the defendants were charged with drug possession in Orleans County in Vermont state court.

The defendants argued that this federal search authority isn’t consistent with Article 11 of the Vermont Constitution. That provision would have required a Vermont police officer to secure a warrant before searching the car without their consent.

“The search of defendants’ car was an unreasonable intrusion into this privacy interest, and we have previously determined that the appropriate remedy for such violation is exclusion of the evidence that was gathered. … The intrusion into defendants’ privacy was not somehow lessened because the search was conducted by a federal agent,” the court opinion states.

Excluding such evidence from state proceedings is essential, the opinion states, because “allowing the State to use evidence gathered in violation of the Vermont Constitution simply because it was gathered by federal law enforcement officers might implicitly encourage federal officers to engage in searches that Vermont officers cannot, so that Vermont officers will reciprocate by passing along information regarding immigration violations.”

Jay Diaz, general counsel of the ACLU Foundation of Vermont, which represented the defendants, hailed the court decision in a statement.

“This critically important ruling means that local police and prosecutors cannot use [the] Border Patrol to do an end run around Vermont’s Constitution. … The strong privacy and dignity protections embedded in our state constitution are a source of state pride and the Court’s decision reaffirms and expands those rights,” Diaz said.

Attorney General T. J. Donovan, a Democrat who filed a friend-of-the-court brief in support of the defendants, said in a statement: “I applaud the Court’s decision.

“The Vermont Constitution protects Vermonters regardless of federal government involvement.”