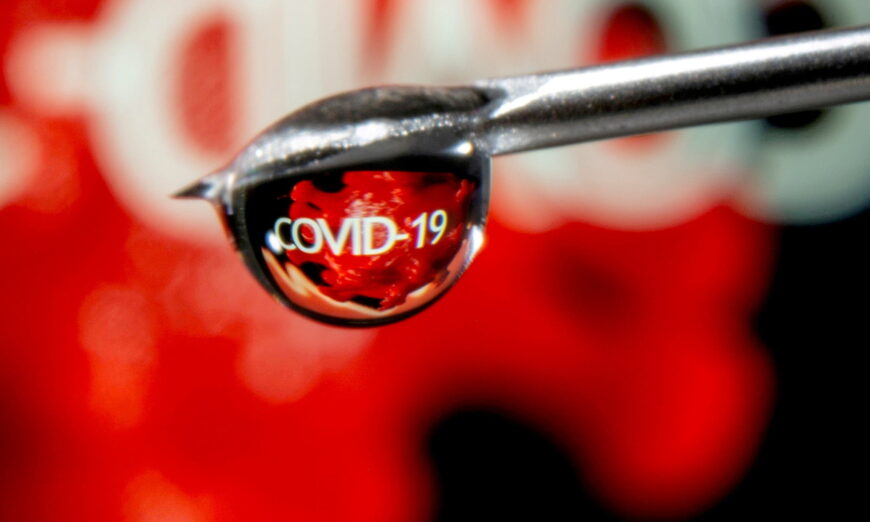 The word "COVID-19" is reflected in a drop on a syringe needle in this illustration taken on Nov. 9, 2020. (Dado Ruvic/Illustration/Reuters)

Having two doses of a COVID-19 vaccine has been linked with negative protection against symptomatic infection from the disease, while a previous infection without vaccination offers around 50 percent immunity, according to data from a study by Weill Cornell Medicine in Qatar.

Their data indeed demonstrated that hybrid immunity, developed through a previous infection and vaccination had the strongest immunity over time.

However, their 6-month data comparing individuals that were only vaccinated to those that have only been previously infected tells a more nuanced story between natural and artificial immunity.

Only Previous Infection Compared to Only Vaccination

The authors of the study found that those who were only infected had a more sustained immunity against COVID-19 symptoms over time as compared to individuals that were only vaccinated.

People that were previously infected had the highest starting immunity against symptomatic infections of at least over 60 percent, with a sustained immunity at around 50 percent even after 6 months.

Whereas, a double-dosed vaccination gave a weak effectiveness of around 40 percent within three months after administration, with the immunity following into negative regions of immunity, indicating an increased risk of symptoms.

Six months after getting two doses of the Pfizer vaccine, immunity against Omicron symptoms gradually dropped to -3.4 percent, below an average person without infection and vaccination (control) which would be set at 0.

For two doses of the Moderna vaccine, immunity against Omicron symptoms dropped to -10.3 percent after more than six months since the last injection.

Though authors wrote in the study that three doses of vaccination had a stronger immunity of over 50 percent. It should be noted that this average was taken at only 42 days after the third vaccination, looking at the decreasing trend in effectiveness over 1 month, it is plausible to speculate that immunity is likely to drop further over time.

In comparison, previous infection gave 50 percent immunity, even over 300 days after the infection, which is a far stronger, and more sustained immunity.

These findings are supported by another recent study from Israel that also found natural immunity waned significantly more slowly compared to artificial, or vaccinated, immunity.

Correction: This article has been updated to include the study’s official conclusions.