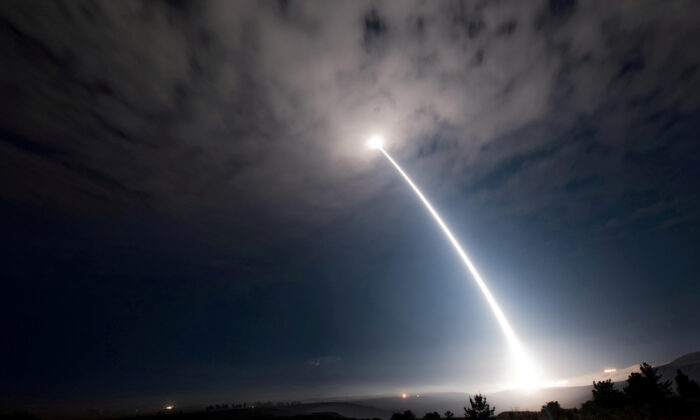 The United States has postponed a test missile launch to try to demonstrate it has no intention of getting into a nuclear war, the military said March 2.

“In an effort that we have no intention of engaging in any actions that could be misunderstood or misconstrued, the secretary of defense has directed that our Minuteman III intercontinental ballistic missile test launch, scheduled for this week, to be postponed,” Pentagon spokesman John Kirby told reporters in Washington.

The launch was going to be held by the Air Force. Military officials declined to say when or where it would have been held.

There’s no new date at this time for the launch.

Kirby said the move was aimed at demonstrating “that we are a responsible nuclear power” and that future test launches may or may not be canceled. Defense Secretary Lloyd Austin remains confident that the current nuclear posture is adequate to defend the United States and allies, he added, explaining why America’s nuclear deterrence levels weren’t altered.

Putin said the move stemmed from the “aggressive statements” that North Atlantic Treaty Organization were making with regards to Russia, in addition to the sanctions they’ve imposed, which he described as illegal.

Ukrainian officials said the announcement was aimed at putting pressure on them to accept a peace deal with poor conditions, which they’ve vowed not to do.

The United States had not taken any concrete action before Wednesday in response to the announcement, though officials decried the move. President Joe Biden on Monday told reporters that Americans should not be worried about the prospect of a nuclear war.

Kirby said there are no indications at present to suggest Putin plans to launch nuclear weapons and called for Moscow to dial down its posture in response to America postponing the test launch.

“Both the United States and Russia have long agreed that nuclear deployment could have devastating consequences. And we both agreed, most recently this year, that a nuclear war cannot be won and must never be fought,” Kirby said. Putin’s “provocative rhetoric” and “possible changes to nuclear posture,” he added, “is unacceptable.”