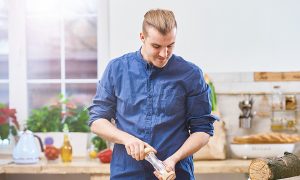 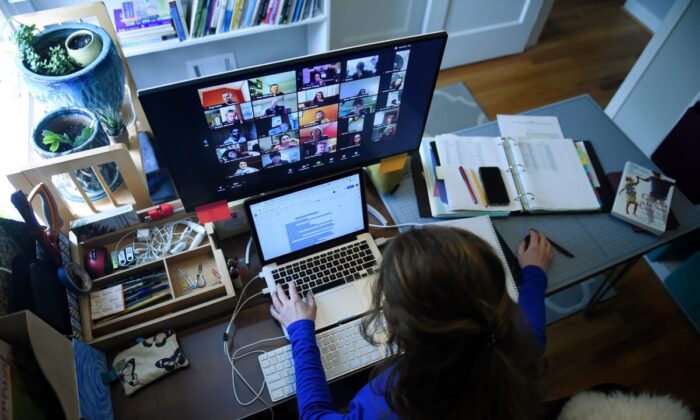 A substitute teacher works from her home due to the pandemic in Arlington, Va., on April 1, 2020. (Olivier Douliery/AFP via Getty Images)
PUBLIC HEALTH INFORMATION

US Adults Gained Over 1 Pound Each Month During COVID-19 Lockdowns: Study

The volunteers participating in the research were all adults ranging in age from their early 30s through their early 60s, and 48.3 percent were men.

“In analyzing weight trends around initial SIP [shelter-in-place], we found a significant increase in weight over the post-SIP period at a rate of roughly a pound and a half weight gain per month following SIP,” the report stated.

“Although this may not appear clinically important, prolonged effects as have occurred with the pandemic might lead to substantial weight gain.”

This research indicates that if the trend continues down this road, some Americans could gain as much as 20 pounds over the course of the lockdown orders from 2020 to early 2021.

Researchers from the University of North Carolina at Chapel Hill analyzed data in another research from 75 studies conducted globally from January and June 2020 involving 399,461 patients with the CCP (Chinese Communist Party) virus and found that people with obesity have a 48 percent higher risk of dying from COVID-19, the disease caused by the CCP virus.

The Centers for Disease Control and Prevention estimates that 39.8 percent of American adults and 18.5 percent of children and adolescents between the ages of two to 19 are obese. The prevalence of obesity is greatest among blacks (50 percent), followed by Hispanics (45 percent), whites (42 percent), and Asians (17 percent).

Obesity was declared an epidemic in 1999, and despite the growing volume of research and information on healthy living and eating, the rate continues to rise.

As this increasing trend continues into 2030, researchers of a study in the New England Journal of Medicine project that 50 percent of adults in America will be obese, and “about a quarter will have severe obesity.”

“Weight is a clinically relevant health outcome that is independently associated with all-cause mortality,” Dr. Marcus wrote in the letter, encouraging people to have healthy diets and search for ways to enhance physical activity.

During nationwide lockdowns, more people stayed at home from work and school. Gyms were also ordered to close and physical activity declined for many people nationwide.

“The purpose of the shelter in place orders is to minimize harm, but these data suggest that other messaging accompanying such orders may be warranted,” Marcus said.

“For example, remember to schedule in time to exercise and stay physically active and avoid snacking between meals as much as possible,” he continued.