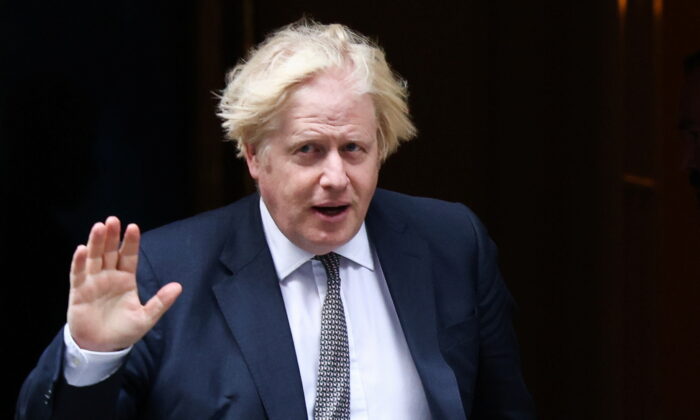 No extension, though, of the US-imposed deadline, leaders say
By Zachary Stieber

The group, which includes the United States, agreed in the meeting on “not just a joint approach to dealing with the evacuation but also a roadmap for the way in which we’re going to engage with the Taliban, as it probably will be a Taliban government in Kabul,” Johnson told reporters in the UK after the emergency Aug. 24 virtual summit.

“And the number one condition we’re setting as G-7 is that they’ve got to guarantee right the way through, through August 31st and beyond, a safe passage for those who want to come out.”

If the Taliban doesn’t agree, then the G-7 has “very considerable leverage—economic, diplomatic and political,” Johnson said.

The Taliban took over Afghanistan this month after the United States withdrew most of its troops from the country. Currently, dozens of flights are flying evacuees from the U.S.-held airport in Kabul on a daily basis.

But President Joe Biden set an Aug. 31 deadline for the withdrawal, which the Taliban are insisting is adhered to and have threatened “consequences” if it isn’t. A spokesman for the group told reporters in Kabul earlier on Aug. 24 that the United States must evacuate its citizens by the deadline.

While Johnson and other allies have pushed Biden to extend the deadline, that mission seems to have morphed into a plan to apply pressure on the Taliban, according to leaders after the G-7 meeting.

Still, she echoed Johnson in saying leaders are “preparing intensively” for the phase after the deadline.

“We need to find a way to make sure that even after this deadline it is still possible to evacuate local staffers and people in need of protection,” she said.

A group of officials is being put together from within the G-7 to form a plan of action on how to deal with the Taliban in the future, she added.

“We want a unified G-7 response and it won’t help anything if each nation just does its own thing but what we can say is that the evacuation is being carried out with a great feat of togetherness but, of course, I have to emphasize that the U.S. has the lead here,” she said. “Without the U.S., we can’t continue with the evacuations; this must be made clear!”

Biden was scheduled to speak after the meeting but his remarks were delayed for more than four hours.

White House press secretary Jen Psaki said in a statement that Biden “conveyed that our mission in Kabul will end based on the achievement of our objectives.”

“He confirmed we are currently on pace to finish by August 31st and provided an update on progress in evacuating Americans who want to come home, third-country nationals, and Afghans who were our allies during the war,” she added, before describing added risk because of threats from ISIS-K, an affiliate of the ISIS terrorist group.

The completion of the mission by the deadline depends on continuing coordination with the Taliban, she added.