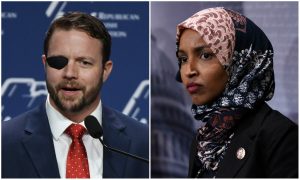 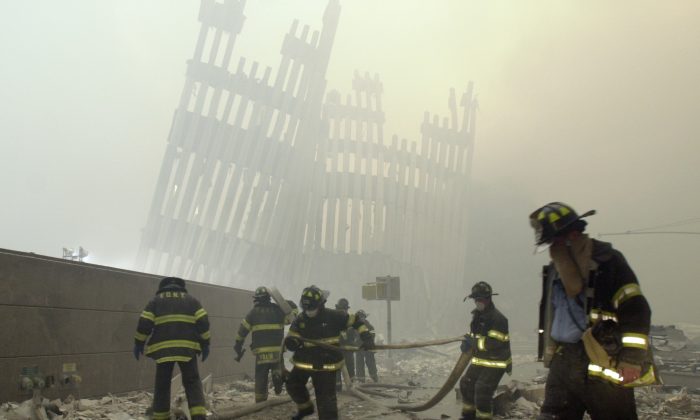 Firefighters work beneath the destroyed mullions, the vertical struts which once faced the soaring outer walls of the World Trade Center towers, after a terrorist attack on the twin towers in New York on Sept. 11, 2001. (Mark Lennihan/AP)
US News

Three U.S. Senators called on the Inspector General to investigate the mishandling of subpoenas in a lawsuit by 9/11 families, as they seek to hold the Saudi government accountable for its part in the 9/11 terrorist attacks.

“We write to bring to your attention troubling reports concerning the FBI’s irregular treatment of a civil subpoena issued by the September 11 families for evidence critical to their pending lawsuit pursuant to the Justice Against Sponsors of Terrorism Act (“JASTA”),” wrote the senators.

In a letter sent Monday to I.G. Michael Horowitz, the lawmakers asked the Department of Justice to investigate any “lack of integrity” on the FBI’s part in the handling of the subpoenas.

The office of the Inspector General declined to comment on their response to the senator’s letter.

The 9/11 families are seeking information about Saudi government employees Fahad al Thumairy, Omar al Bayoumi, and any accomplices, who are known to have assisted the hijackers in preparing for and carrying out the attacks.

“The 9/11 families served a civil subpoena on the FBI in April of 2018 seeking this information,” stated the senators.

The lawmakers said that the families’ claims raise questions about how and why the FBI may be withholding information from 9/11 families. “… any irregularities, abuse, fraud, or improprieties in the handling of the 9/11 families’ subpoena for evidence are entirely unacceptable.”

Terry Strada, the national chair of the 9/11 Families & Survivors United for Justice Against Terrorism, praised the senators for their support.

“We greatly appreciate that these senators are urging this long-overdue investigation because we are sick and tired of our government’s fixation on secrecy at the expense of the truth,” Strada said in a statement to Courthouse News. “First our government pointlessly hid the ‘28 pages’ of the 9/11 Joint Inquiry report and then urged Congress to deny us the right to expose the Saudi role in the mass murders of September 11. Now, they are hiding the evidence that shows they have been lying all along. Enough already.”

The Lawmakers criticized the FBI for not being transparent and providing the necessary evidence to the terrorist attack victim’s families. “Circumstances that leave the impression that our government is hiding facts about 9/11 from the families and public tear at the very fabric of our democracy, and erode trust in our government”.

“We urge you to conduct an immediate and expedited review of the FBI’s response to the families’ subpoena, and to publish a public report of your findings as soon as possible.”

The subpoenas were in connection to a March 2017 lawsuit against the Kingdom of Saudi Arabia by injured survivors and family members of 9/11 victims. The plaintiffs allege that the Saudi Arabian government had pre-existing knowledge that some of its employees were al Qaeda operatives or sympathizers.

The lawsuit created tensions between the United States and the Saudi Government and was only able to be filed after the Justice Against Sponsors of Terrorism Act (JASTA) was passed in 2016.

After former President Obama vetoed the Act, the House and Senate members overwhelming voted to pass the bill to give victims the power to hold foreign governments responsible for terrorism on U.S soil.

“The law expressly targets those inexcusable instances where foreign governments knowingly and willingly supply the funds and support what terrorists need in order to successfully execute their plans,” said the 9/11 Families & Survivors United for Justice Against Terrorism.