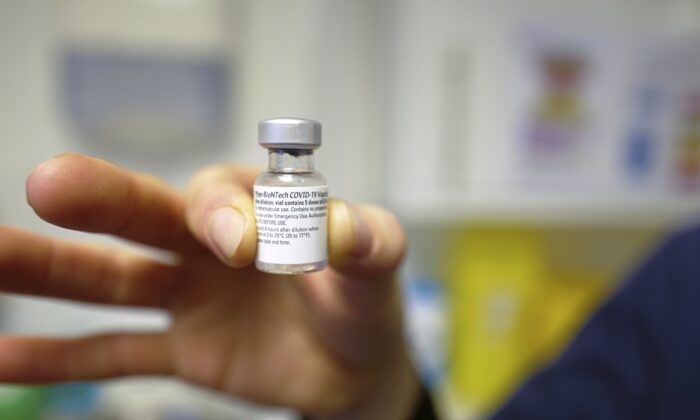 A 41-year-old mother of two was found dead by her boyfriend two days after getting a COVID-19 vaccine, in Portugal, having shown no prior signs of adverse reactions.

Sonia Acevedo, who worked in a pediatric clinic in Porto, Portugal, was one of 538 health professionals to receive the first of two jabs of the experimental Pfizer BioNTech COVID shots, on Dec. 30.

She proudly changed her profile picture on Facebook to mark herself “vaccinated” wearing a mask, just after the injection. Feeling perfectly normal, she enjoyed dinner with her family on New Year’s Eve, and then traveled to see her partner, who found her dead on Jan. 1.

Acevedo’s grieving father, Abilio Acevedo, was quoted in The Daily Mail, saying his daughter never drank alcohol, never ate anything out of the ordinary, and was in perfect health. “I want to know what caused my daughter’s death,” he said.

Her daughter, Vania Figueiredo, posted on Facebook two photos of herself, her mother, and a family dog, taken Dec 24, and 26.

“When these two pictures were taken I was in your lap, and I didn’t even imagine I was going to lose you,” she wrote. “You were so well, so healthy, so cheerful, so happy….and I was so warm with you. You will always remain the best mom in the world no matter where you are.”

The Pfizer vaccine was issued under an emergency use authorization. As such it is not an FDA-approved vaccine, and was produced with a less extensive testing regime than is customary. The Epoch Times previously reported four elderly deaths in three countries following administration of the Pfizer vaccine.

“It has begun. The deaths have begun,” said Vera Sharav, founder of Alliance for Human Research Protection. Sharav survived a concentration camp in Ukraine as a child, and campaigns for consent in biomedicine.

“Everyone who gets any of these vaccines is partaking in a vast medical experiment, unbeknownst to them. The vaccines so called—really they are a novel form of genetic manipulation—have not been tested for safety or efficacy…It’s profoundly worrying.”

Vaccine defenders say there is still no proof anybody has died from any COVID vaccine and that it the height of murderous irresponsibility to bring up adverse events or deaths.  The singer Selena Gomez recently blasted Facebook for being responsible for “thousands of deaths” for allowing “disinformation”—meaning “lies about COVID and vaccines”—to be spread on its platform.

The New England Journal of Medicine concluded a positive evaluation of the vaccine: “Safety over a median of 2 months was similar to that of other viral vaccines.”