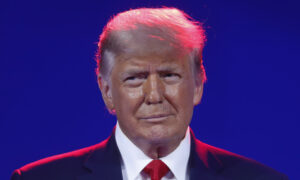 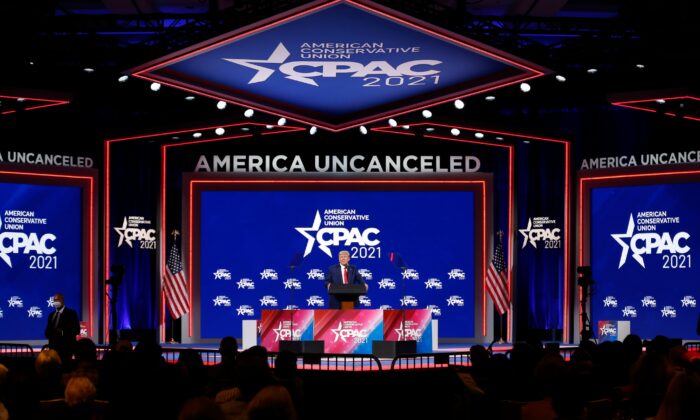 Former President Donald Trump is still the most popular candidate for the Republican Party’s 2024 presidential nomination, according to a CPAC straw poll, with 55 percent of respondents saying they would vote for him in a hypothetical primary.

The poll, conducted at the Conservative Political Action Conference (CPAC) from Feb. 25 to 28, pitted Trump against 20 other potential GOP primary candidates, including Florida Gov. Ron DeSantis and South Dakota Gov. Kristi Noem. The results demonstrate that the former president still holds a solid grip on the party, with DeSantis trailing well behind at 21 percent and Noem in third place with 4 percent.

Respondents also were asked who they would vote for if Trump was not a candidate. Polling data found that DeSantis would then become the frontrunner with 43 percent support, with Noem and Donald Trump Jr. trailing at 11 percent and eight percent, respectively.

“So again, you see how important to everybody here—the grassroots, the base of the conservative movement, the base of the Republican Party—it is either President Trump or a Trump candidate,” said pollster Jim McLaughlin, who announced the results on Feb. 28. His firm conducted the poll for CPAC and The Washington Times.

Ninety-seven percent of the respondents said they approved of Trump’s job performance as president, with 87 percent saying that they strongly approved.

“Look at it, probably no one in the history of the conservative movement has earned your support the way this president has,” McLaughlin said.

The poll also found that 95 percent of the respondents would like Republicans to continue with Trump’s America First agenda, with only 3 percent saying they would like to see a change in direction.

This comes as Republicans assess the path forward in a post-Trump presidency. While some Republicans, including Senate Minority Leader Mitch McConnell (R-Ky.), have called for the party to move away from Trump, most support the former president and his agenda.

The polling results were released just before Trump was scheduled to address the audience at the annual conservative event. His speech at CPAC was the former president’s first major public appearance since leaving office.

During that speech, Trump said that his “Make America Great Again” movement, which has been his vision these past four years, is “far from over.”

“We all knew that the Biden Administration was going to be bad—but none of us imagined just how bad they would be, and how far left they would go,” he said. “Joe Biden has had the most disastrous first month of any president in modern history.

“I stand before you today to declare that the incredible journey we began together four years ago is far from over.”

He also shared his assessment of where he thinks Biden’s administration is headed, spoke out against the Chinese communist regime and socialism, and criticized Big Tech for its censorship of conservatives.

The poll was conducted among 1,007 attendees at CPAC, which was held at the Hyatt Regency hotel in Orlando.