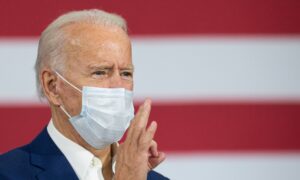 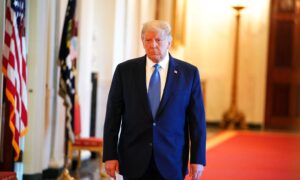 LIVE: President Trump Announces Nominee for Associate Justice of the Supreme Court of the United States
0 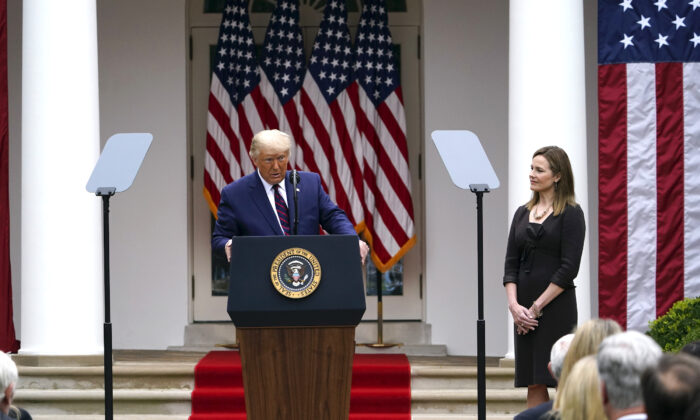 Judge Amy Coney Barrett listens as President Donald Trump announces Barrett as his nominee to the Supreme Court, in the Rose Garden at the White House in Washington on Sept. 26, 2020. (Alex Brandon/AP Photo)
Trump Administration

President Donald Trump said he believes his Supreme Court nominee Amy Coney Barrett could tip the high court toward a decision to overturn Roe v. Wade by possibly allowing individual states to decide whether they should ban abortion.

“She is certainly conservative in her views, in her rulings, and we’ll have to see how that all works out but I think it will work out,” Trump told Fox News on Sunday.

When asked about whether the landmark abortion ruling could be overturned, Trump said, “It’s certainly possible. And maybe they do it in a different way. Maybe they’d give it back to the states.”

“You just don’t know what’s going to happen,” he noted, adding that Barrett as well as Justices Neil Gorsuch and Brett Kavanaugh would “rule on a life issue.”

In the interview, Trump noted that justices that he appointed wouldn’t necessarily hand over rulings after some decisions by the court that he didn’t favor, including one in July about whether Trump could ignore a subpoena calling him to release his tax returns. Gorsuch also joined the liberal wing of the Supreme Court that declared workplace discrimination against LGBT employees as illegal.

“I’ve been surprised by some of the rulings that we’ve already had over the last year. You know, you think you know somebody and then you get rulings that are a little bit different than you think could happen,” Trump said, adding that he is “mostly” looking for a justice who “can interpret the Constitution as written.”

On Saturday, Barrett was named as his nominee to replace Justice Ruth Bader Ginsburg, who died earlier this month of cancer complications. The Senate nomination fight, which comes just weeks before the November election, is expected to be particularly bitter.

Senate Republicans are aiming for a speedy confirmation process and hope to confirm Barrett before Election Day, as the court could possibly hand down a ruling on the election should it be contested.

Democrats have been forcefully critical of Republicans’ move to nominate Barrett, with members of the progressive wing threatening to “pack the courts” with more justices if Trump’s pick is confirmed and they win the presidency or control both chambers of Congress. They have also said that the winner of the election should be the one who picks the nominee.

But Trump and Senate Majority Leader Mitch McConnell (R-Ky.) said that it is the president’s Constitutionally-mandated requirement to select a Supreme Court justice.

At the White House on Saturday, Trump called for a respectful nomination process.

“This should be a straight forward and prompt confirmation—should be very easy. Good luck,” Trump said. “It’s going to be very quick. I’m sure it’s going to be extremely non-controversial.”

In 2018, when Trump nominated Kavanaugh, Democrats attempted to dig up allegations about Kavanaugh when he was in high school and in college.

“I further urge all members of the other side of the aisle to provide Judge Barrett with the respectful and dignified hearing that she deserves and frankly that our country deserves,” the president said.