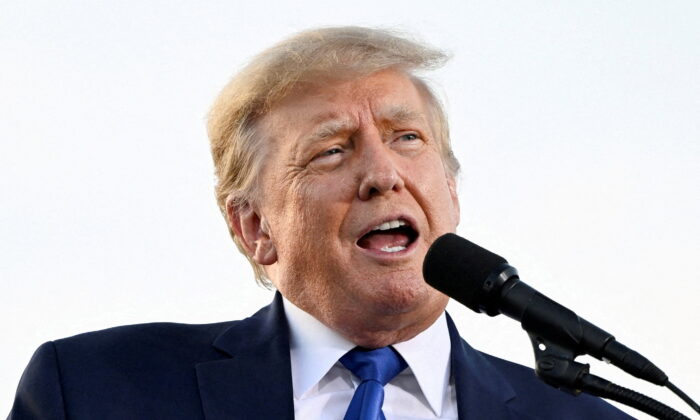 Former President Donald Trump speaks during a rally to boost Ohio Republican candidates ahead of their May 3 primary election, at the county fairgrounds in Delaware, Ohio, on April 23, 2022. (Gaelen Morse/Reuters)
2024 Election

Trump Says He Will Look ‘Very Seriously’ at Pardons for Some Jan. 6 Defendants

Former President Donald Trump said Friday that he will seriously evaluate pardons for some defendants who were charged by the federal government in connection to the Jan. 6 Capitol incident.

During a speech in Nashville on Friday, Trump again suggested that he may run for president in 2024 and if he is elected, pardons would be considered.

“And if I become president someday—if I decide to do it—I will be looking at them very very seriously for pardons,” Trump told an audience, as applause and cheers erupted. “They’ve been treated very unfairly.”

A number of Jan. 6 defendants, Trump said, had “their lives totally destroyed and [are] being treated worse than terrorists and murderers despite most being charged with parading through the Capitol.”

The former commander-in-chief did not elaborate on who he believes should receive a pardon.

A coalition of Republican lawmakers on Thursday blasted the treatment of Jan. 6 detainees, saying it was akin to that of “political prisoners” in authoritarian countries.

Rep. Marjorie Taylor Greene (R-Ga) in a press conference said the detainees are “being used as pawns to dangle in front of [Americans] to show that if you cross a certain line, if you support a certain president—as in President Trump—or if you dare to speak up against the government or … against an election being stolen, you’re going to be used.”

“This is what’s gonna happen to you. You’re gonna spend your days wasting away in solitary confinement,” she said.

According to a June 6 update released by the Department of Justice, more than 840 people have been arrested and charged in connection to the Jan. 6 Capitol breach. Of that figure, around 255 have been arrested on charges of assaulting, resisting, or impeding officers or employees, including 90 who have been charged with using a deadly or dangerous weapon or who have caused serious injury to an officer.

Three individuals have pleaded guilty to the federal charge of seditious conspiracy, the DOJ also said.

Despite well-publicized claims to the contrary, no police officers died on Jan. 6, 2021. Officer Brian Sicknick died a day after the incident, and the D.C. Medical Examiner’s Office last year ruled that he died of natural causes from a stroke.

While some Democrat lawmakers and corporate news outlets have continued to push a narrative that the breach was a “deadly insurrection,” the four people who died on Jan. 6 were all apparent Trump supporters who came to the former president’s speech hours before. One of them, U.S. Air Force veteran Ashli Babbitt, was shot by an officer, according to the U.S. Capitol Police Department.

Meanwhile, the House panel investigating the Capitol breach claimed that Trump put former Vice President Mike Pence’s life in mortal danger on Jan. 6, 2021. The committee, which has two Republicans and seven Democrats, alleged that Trump was directly responsible for the breach and that hundreds of interviews with various witnesses prove their case.

There was a Trump-inspired “pressure campaign directly contributed to the attack on the Capitol, and it put the vice president’s life in danger,” a committee aide told reporters this week in a conference call. The third House Jan. 6 hearing was held on Thursday.