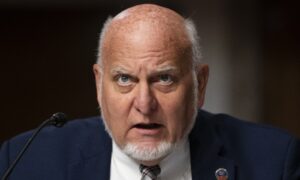 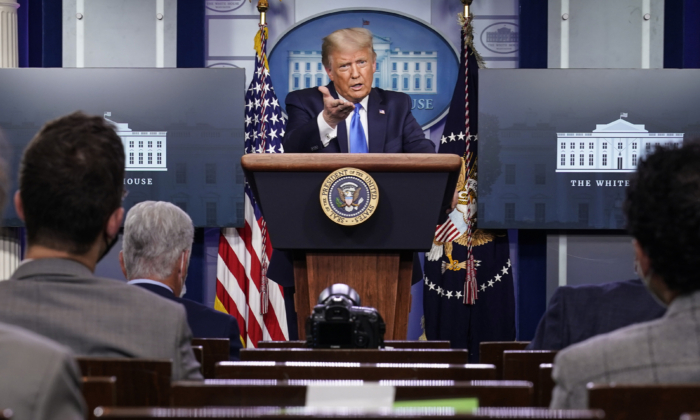 President Donald Trump speaks during a news conference in the briefing room of the White House in Washington on Sept. 23, 2020. (Joshua Roberts/Getty Images)
Trump Administration

President Donald Trump on Sept. 23 questioned the need for tougher vaccine approval standards on the part of the Food and Drug Administration (FDA), saying the plan “sounded extremely political” and would be subject to White House approval.

According to multiple media reports, including by The New York Times and The Washington Post, unnamed sources said the FDA has been developing stricter guidelines for the emergency authorization of a COVID-19 vaccine, a plan that Trump was asked about at a White House briefing.

“We’re looking at that. That has to be approved by the White House. We may or may not approve it. That sounds like a political move,” Trump told reporters.

The president said he wants to avoid any unnecessary delay in the release of a vaccine, adding that he has “tremendous trust” in companies working on its development.

“When you have great companies coming up with these vaccines, why would they [the FDA] have to be, you know, adding great length to the process? We want to have people not get sick,” Trump said.

Citing two anonymous sources who weren’t authorized to publicly discuss the FDA’s expected new guidance, The Washington Post reported Sept. 22 that the more stringent standard, which the paper characterized as “far more rigorous than what was used for emergency clearance of hydroxychloroquine or convalescent plasma,” will include a requirement for a median of two months of data on clinical vaccine trial participants.

That would make it more difficult for a vaccine to be cleared for distribution ahead of Election Day. Democrats and some health experts have raised concerns about the potential for political pressure in the race to deliver COVID-19 vaccine.

The guidance issued was a followup to guidance put out in June by FDA Commissioner Dr. Stephen Hahn, White House press secretary Kayleigh McEnany told reporters at the White House on Sept. 24.

“It was guidance that they gave to pharmaceutical companies to provide them with more regulatory clarity,” she added.

Asked what Trump meant, she said: “The FDA does have strict standards, they are the gold standard with regard to vaccines. The president was referring to the normal interagency process that happens with guidance, and that includes running through the Office of Management and Budget.”

Trump has repeatedly said a vaccine could be ready as soon as October. At the briefing, he cited “great numbers and statistics and tests” that he said vaccine developers have been presenting in the course of clinical trials, adding that the companies have said they have a candidate that “absolutely works.”

“I don’t see any reason why it should be delayed further. Because if they delay it a week or two weeks or three weeks, you know, that’s a lot of lives you’re talking about,” Trump said.

Asked by reporters about the president’s remarks, White House adviser Scott Atlas touted the administration’s initiative to fast-track a vaccine and therapeutics in record time, dubbed Operation Warp Speed, saying it’s “highly likely” it will lead to a vaccine in “far less than one year” compared to the usual four, without shortcuts on safety.

“But there is zero cutting of safety concerns,” he said. “There should be no hesitation about the safety. You shouldn’t be punished by doing something faster than other people could have done or thought; it’s the opposite. We have a pandemic. The urgency is the pandemic, not politics.”

The FDA didn’t immediately respond to a request by The Epoch Times for comment.