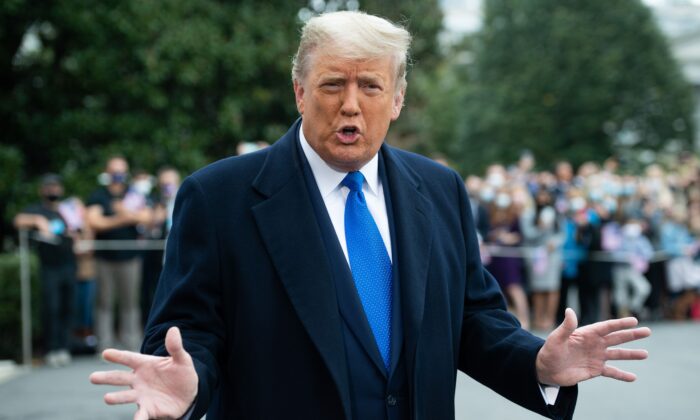 President Donald Trump speaks to the media as he walks to Marine One prior to departing from the South Lawn of the White House in Washington, D.C., on Oct. 27, 2020. (Saul Loeb/AFP via Getty Images)
Donald Trump

Trump: ‘Nobody Should Be Forced to Get’ COVID-19 Vaccine

Former President Donald Trump again endorsed COVID-19 vaccines but said that people should not be forced to get them—likely in response to several states and countries pushing for vaccine passport-type systems.

“The vaccine is a great thing and people should take advantage of it,” Trump told the New York Post on Thursday, but qualified his remarks by saying, “Nobody should be forced” as Americans “have our freedoms.”

“But I strongly recommend it because it’s a real lifesaver,” the former commander-in-chief continued, noting that his administration pushed to develop vaccines against the CCP virus. “I’m all in favor of the vaccine,” Trump said. “It’s one of the great achievements, a true miracle.”

In the NY Post interview, Trump confirmed that he and his wife Melania Trump received the vaccine against the CCP virus several months ago. The former president did not say if he received the Moderna, Pfizer, or Johnson & Johnson vaccine.

“Not even a bit of arm soreness,” he said. “It’s pretty amazing stuff.”

Vaccine passport systems have come under fire in recent days, with several Republican governors—including Texas Gov. Greg Abbott and Florida Gov. Ron DeSantis—issuing orders to block such systems from being implemented in their respective states. Some civil liberties proponents have speculated that a passport system would divide society into two distinct classes of people: those who are vaccinated and those who are not.

Lawmakers in some states have also passed bills that would ban vaccine passports. This week, Indiana’s state legislature passed a measure that would ban state and local governments from issuing CCP virus passports, meaning Indiana cannot mandate that individuals get the vaccine.

The American Civil Liberties Union (ACLU) in late March also voiced concern about such proposals, saying that it would likely violate Americans’ privacy—namely if there is a centralized, digitized system. The group noted that individuals who do not have a smartphone with an app saying they are vaccinated could be excluded from certain services.

So far, no federal agency has mandated a vaccine passport-type system, although New York state recently rolled out its “Excelsior” app that would allow individuals to enter sports arenas, events, and more if those facilities use it. The app, however, is not mandated by any state law.

Some countries, including Israel and Iceland, have mandated vaccine passports for certain activities.