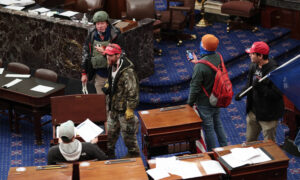 Trump Makes Statement to Capitol Protesters, Calls on Them to ‘Go Home Now’

President Donald Trump on Wednesday called on protesters who were amassed near the U.S. Capitol building during the joint session of Congress to go home, while asserting that the election was stolen from him.

Trump asserted that the election was “fraudulent,” but stipulated that Capitol protesters “can’t play into the hands of these people … we have to have peace.”

Trump then called on his supporters to go home and “go home in peace.”

It came as throngs of people stormed the Capitol building during the joint session of Congress, as the House and Senate were debating on whether to certify states’ electoral results.

Before Trump’s video post, he called on the demonstrators to remain peaceful and not attack U.S. Capitol Police officers.

According to photos of the scene, some people were able to enter the House and Senate buildings—and even sat in the chairs of lawmakers.

Most members of Congress—Republican and Democratic—condemned the incident and called on the people to leave. House Speaker Nancy Pelosi (D-Calif.), Senate Minority Leader Chuck Schumer (D-N.Y.), and Joe Biden called on Trump to address the supporters and tell them to leave.

Biden, in a televised address at around 4 p.m., said Trump should go on television “now” to address the protesters and told them to go home, branding the event as an “insurrection” and “bordering on sedition.”  Pelosi (D-Calif.) said she and Schumer “are calling on President Trump to demand that all protestors leave the U.S. Capitol and Capitol grounds immediately.”

Vice President Mike Pence, who was reading out certificates, also condemned the violence in a tweet.

“The violence and destruction taking place at the US Capitol Must Stop and it Must Stop Now,” Pence wrote. “Anyone involved must respect Law Enforcement officers and immediately leave the building … peaceful protest is the right of every American but this attack on our Capitol will not be tolerated and those involved will be prosecuted to the fullest extent of the law.”

The National Guard is en route to the Capitol, officials said.

At Trump’s direction, “the National Guard is on the way along with other federal protective services,” White House press secretary Kayleigh McEnany said in a statement.

“We reiterate President Trump’s call against violence and to remain peaceful,” she added.