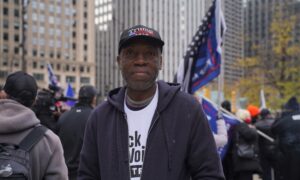 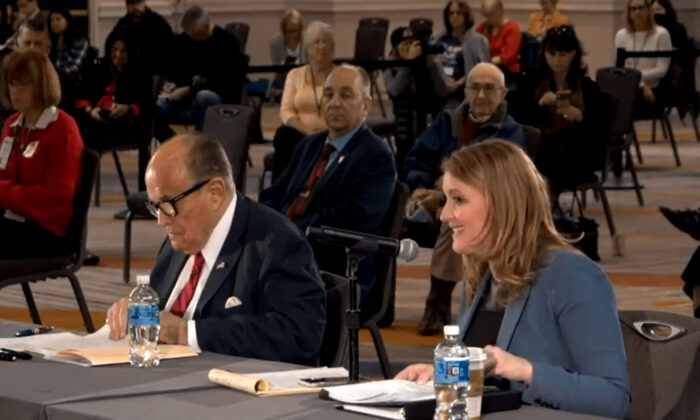 President Donald Trump’s lawyer suggested on Wednesday that one reason why more witnesses and whistleblowers haven’t come forward with claims of voter fraud is that they are being intimidated, suggesting that one Democratic state lawmaker was trying to “dox” a woman who offered testimony.

“How do you know these witnesses are telling the truth about Democrat intimidation? Because you’re witnessing Michigan LEGISLATORS openly intimidating them on the floor of this committee, on national television,” Jenna Ellis wrote on Twitter.

Ellis also highlighted a video clip of Michigan House Rep. Cynthia Johnson, a Democrat from Detroit, where Johnson asked a witness—Jessy Jacob—about what her “real name” is. Jacob replied that her last name changed after she got married. Johnson then asked for the spelling of her maiden name. It was the only question she asked.

Ellis suggested that in that interaction, Johnson was “[trying] to intimidate and publicly dox a witness on national television simply because she doesn’t like the witness’s testimony.”

Jacob had delivered a statement in front of lawmakers alleging, among other things, that she was told by election workers to backdate ballots. She described the behavior as fraudulent and corrupt.

Johnson’s office hasn’t responded to a request for comment.

In another instance in the hearing, Johnson accused House Oversight Chairman Matt Hall, a Republican, of allowing witnesses “to come in here and lie,” which prompted Hall to slam the gavel several times and telling her she is “out of order” multiple times.

“Every single witness we’ve presented her has sworn an affidavit as to all of these facts,” Trump lawyer Rudy Giuliani said after the exchange.

“From my skin color everyone assumes that I’m a Democrat, so they just kind of come to me and one of the ladies was saying let’s get these m-f’s out. And I’m like m-fs who? … When I pulled out my tag, she looked at me and said you’re on the wrong side,” Kolanagireddy said.

In Michigan, several Republican officials have said they’ve faced threats or harassment since the Nov. 3 election. One GOP member of the state Board of Canvassers who didn’t vote to certify the election said he received a number of anonymous phone calls, with some allegedly threatening his “wife and children.” Two Republican members of the Wayne County Board of Canvassers also swore they received threats, claiming one Democratic lawmaker tried to dox them.