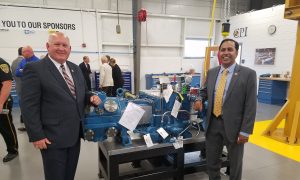 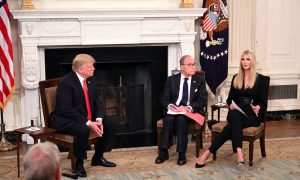 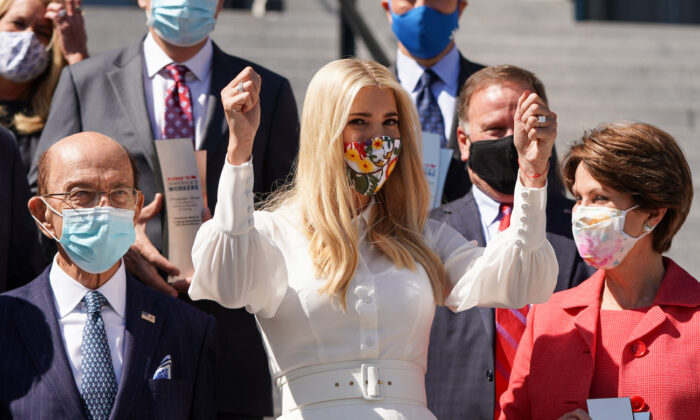 Senior White House Advisor Ivanka Trump raises her hands during a group photo with the winners of the Pledge To America's Workers Presidential Award in the Eisenhower Executive Office Building in Washington, on Sept. 23, 2020. (Joshua Roberts/Getty Images)
Trump Administration

President Donald Trump on Wednesday awarded nine U.S. companies with a “Pledge To America’s Workers Presidential Award” under the administration’s initiative to create and maintain jobs for Americans through promoting education and training opportunities for Americans.

Advisors to the president, Ivanka Trump and Secretary of Commerce Wilbur Ross, on Wednesday hosted a ceremony—the first of its kind—to present the awards.

The new presidential award “recognizes the demonstrated excellence and commitment to the education and training of an organization’s workforce.” According to the White House, the award was created in July 2018 to call on the private sector to invest in advancing the nation’s current and future workforce.

“Through the White House’s Pledge to America’s Workers, the Trump administration challenged the private sector to make a major investment in the education and training of their workers to ensure Americans have the skills necessary to remain the best in the world,” the president’s daughter said in a statement.

“We have seen that challenge begin to be answered with over 16 million job training pledges committed to date. On behalf of the President, I am honored to award nine extraordinary organizations the Pledge to America’s Workers Award for their commitment to the exceptionalism of the American worker and for their steadfast resolve to equip their employees with the tools to succeed in the jobs of today and tomorrow.”

Ivanka Trump shared photos of the ceremony on Twitter.

When POTUS took office he called on the private sector to step⬆️ their investment in 🇺🇸workers.

Awarded 9 of them today who showed excellence in their #PledgetoAmericasWorkers commitment pic.twitter.com/B9jgIAf5DY

The award program is administered by the Department of Commerce with support of the Department of Labor, and on behalf of the National Council for the American Worker. The national council was established and tasked with developing a strategy to grow the workforce via an executive order that President Trump signed in July 2018.

“Every day, we are lifting our forgotten Americans off the sidelines, out of the margins, and back into the workforce,” Trump said at the time. “We need talented people. We need people with training.”

Read More
America’s Got a Talent Problem, but the Trump Administration Has a Plan to Fix It

Since the order’s signing, more than 440 companies and organizations have signed the “Pledge to America’s Workers,” which has contributed to more than 16.3 million new education and training opportunities for American students and workers over the next five years.

“Every single pledge is a commitment to the promise of every individual and his or her potential,” Ivanka Trump said in July 2019.

The executive order also established the American Workforce Policy Advisory Board, which works directly with the national council. The Board brings members from the private sector, educational institutions, and state and local governments to help create more jobs by “improving jobs data transparency and skills-based hiring and training, advancing opportunities for lifelong learning, and promoting multiple pathways to family-sustaining careers.”

“President Trump wants all Americans to have equal opportunities in the job market based on their skillsets,” Secretary Ross said in a statement on Wednesday.

“The American Workforce Policy Advisory Board highlights learning and employment records as key technological indicators for workers, employers, and educational institutions to build a skills-based labor market,” Ross said. “IBM, Salesforce, and Walmart are providing learning and employment records in diverse fields such as cybersecurity, nursing, and retail in order to open more doors for Americans.”

The companies awarded for “excellence in workforce education and training” are:

In another commitment to creating more American jobs, the president earlier this year signed an executive order that directs the federal government to “open the playing field to all” by giving higher priority to a job applicant’s skills than merely having a formal qualification.