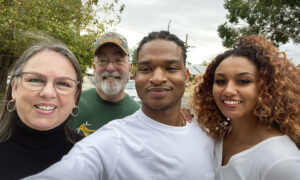 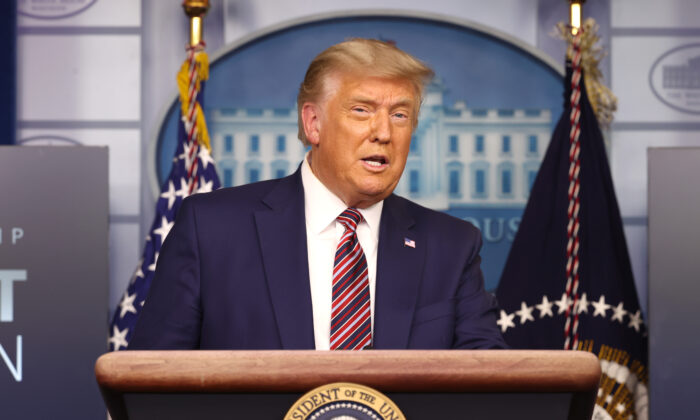 President Donald Trump speaks to the press in the James Brady Press Briefing Room at the White House in Washington on Nov. 20, 2020. (Tasos Katopodis/Getty Images)
US News

Trump Encourages Americans to Gather and Offer Thanks to God

President Donald Trump has encouraged Americans to gather and offer thanks for the “the abundant blessings in our lives” in celebration of Thanksgiving.

In a proclamation ahead of the national holiday, Trump urged Americans to commemorate the country’s “founding traditions of faith, family, and friendship, and give thanks for the principles of freedom, liberty, and democracy.” It is a custom for presidents to issue proclamations celebrating national holidays.

His comments also called on Americans to “gather, in homes and places of worship, to offer a prayer of thanks to God for our many blessings,” which has received scrutiny from the media for contravening public health expert advice and guidance.

The Centers for Disease Control and Prevention issued a recommendation earlier this month asking Americans not to travel for family gatherings in order to prevent the spread of COVID-19, the disease caused by the CCP (Chinese Communist Party) virus. Most people who get the disease show few or no symptoms and the vast majority, over 99 percent, survive.

“The tragedy that could happen is that one of your family members is coming to this family gathering and they could end up severely ill, hospitalized, or dying,” Dr. Henry Walke, the CDC’s COVID-19 incident manager, told reporters during a telebriefing. “And we don’t want that to happen. These times are tough, it’s been a long outbreak, almost 11 months, and we understand people are tired.”

Other health officials have instead recommended virtual gatherings to celebrate the holiday.

Meanwhile, Democratic nominee Joe Biden highlighted the virus during his thanksgiving address on Wednesday, telling Americans to prepare for a “long, hard winter” and to “forego many of the traditions that have long made this holiday a special one.”

“We need to remember we are at war with a virus—not with each other,” Biden said, according to his prepared remarks.

Trump’s proclamation underscored the strength Americans displayed during the pandemic and that the adversity revealed the courage and generosity of Americans.

“First responders, medical professionals, essential workers, neighbors, and countless other patriots have served and sacrificed for their fellow Americans, and the prayers of our people have once again lifted up our Nation, providing comfort, healing, and strength during times of uncertainty,” Trump said. “Despite unprecedented challenges, we have not faltered in the face of adversity.”

He also expressed his gratitude toward U.S. Armed Forces who were unable to return home to their families for this holiday.

As reports of an increase of COVID-19 cases in recent weeks, several governors have imposed harsh measures, citing the pandemic, including New York Gov. Andrew Cuomo, who imposed a 10-person limit on gatherings, and California Gov. Gavin Newsom, who ordered gatherings to include no more than three households.

Late Wednesday, the Supreme Court in a 5-4 decision blocked Cuomo and other New York officials from imposing their occupancy limits set in a previous executive order.

Cuomo’s order mandated that attendance at religious services remain at 10 people or under in so-called red zones and at 25 or under in orange zones.

“Stemming the spread of COVID-19 is unquestionably a compelling interest, but it is hard to see how the challenged regulations can be regarded as ‘narrowly tailored,’” the Supreme Court said in the unsigned majority opinion (pdf).

“They are far more restrictive than any COVID-related regulations that have previously come before the Court, much tighter than those adopted by many other jurisdictions hard-hit by the pandemic, and far more severe than has been shown to be required to prevent the spread of the virus at the applicants’ services.”