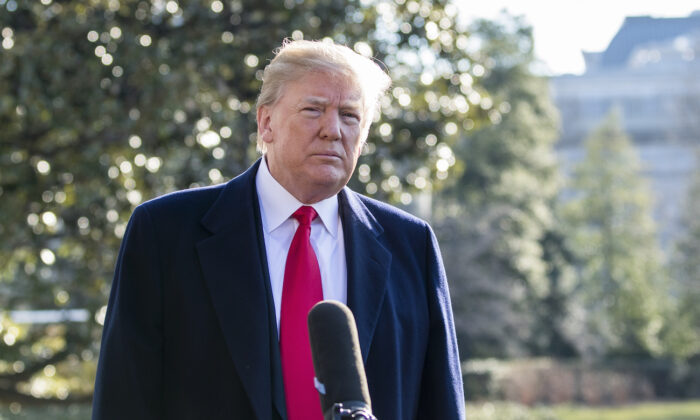 Former President Donald Trump on Tuesday praised the Nigerian government’s decision to block access to Twitter, and called on other countries to do the same.

“Congratulations to the country of Nigeria, who just banned Twitter because they banned their President,” Trump said in a statement. “More COUNTRIES should ban Twitter and Facebook for not allowing free and open speech—all voices should be heard.”

“In the meantime, competitors will emerge and take hold,” Trump continued. “Who are they to dictate good and evil if they themselves are evil?”

The former president suggested that the reason why he didn’t ban Facebook while he was in office was because Facebook CEO Mark Zuckerberg “kept calling me and coming to the White House for dinner telling me how great I was.”

The former president hosted Zuckerberg at the White House twice in 2019. Earlier this month, Trump again hinted at a possible run for the presidency while responding to the news that he’ll be banned from Facebook for two years, saying he won’t attend dinners requested by Zuckerberg “next time I’m in the White House.”

The former president has been banned from Facebook until 2023, and he has also been permanently removed from Twitter following the Jan. 6 Capitol breach.

Nigeria’s Information Minister Lai Mohammed said the government had blocked Twitter access because of “the persistent use of the platform for activities that are capable of undermining Nigeria’s corporate existence.”

“Many of those misbehaving today are too young to be aware of the destruction and loss of lives that occurred during the Nigerian Civil War,” the removed post from Buhari read, referring to the Biafra War between 1967 and 1970 which killed more than one million people. “Those of us in the fields for 30 months, who went through the war, will treat them in the language they understand.”

“We are deeply concerned by the blocking of Twitter in Nigeria. Access to the free and #OpenInternet is an essential human right in modern society,” Twitter said in a statement. “We will work to restore access for all those in Nigeria who rely on Twitter to communicate and connect with the world.”

Nigeria’s media regulator, the National Broadcasting Commission (NBC), meanwhile called on all TV and radio stations to delete their accounts and “desist from using Twitter as a source…of information gathering for news.”

“It would be unpatriotic for any broadcaster in Nigeria to continue to patronise the suspended Twitter as a source of its information,” NBC’s director, Armstrong Idachaba, said.