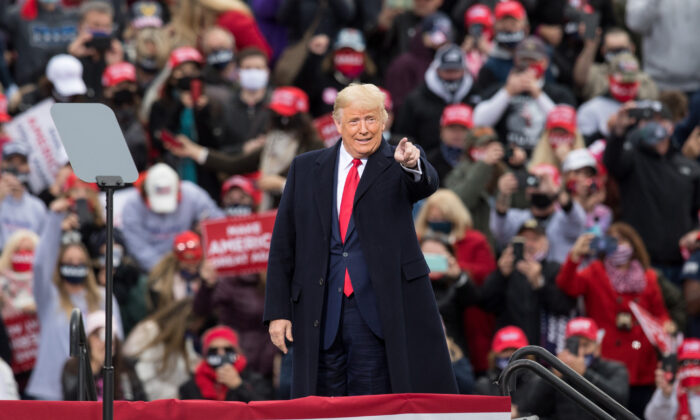 Trump Says US Is ‘Rounding the Turn’ on COVID-19 Pandemic

President Donald Trump said the United States is “rounding the turn” on the CCP virus pandemic, as he addressed a crowd during a campaign rally on Oct. 25 in New Hampshire.

“There’s no nation in the world that’s recovered like we’ve recovered,” Trump said. “Our numbers are incredible.”

The president’s remarks came as the United States on Oct. 25 marked a daily high in confirmed cases of COVID-19, the disease caused by the CCP (Chinese Communist Party) virus, with 82,630 new cases but no major change in the number of deaths. However, about half of states nationwide have seen their highest daily infection numbers so far at some point this month, and hospitalizations are increasing.

The president’s remarks came after he challenged Democratic presidential nominee Joe Biden’s claim last week that the administration has “no clear plan” for fighting the CCP virus epidemic and that a “dark winter” is coming.

“We’re about to go into a dark winter, a dark winter, and he has no clear plan. And there’s no prospect that there’s going to be a vaccine available for the majority of the American people before the middle of next year,” Biden said during the Oct. 22 debate.

Trump rejected the notion that his administration has no plan to fight the outbreak of the CCP virus and pushed back against Biden’s claim that things would get worse.

“I don’t think we’re going to have a dark winter at all,” Trump replied. “We’re opening up our country. We’ve learned and studied and understand the disease, which we didn’t at the beginning.”

Trump acknowledged that there have been some “spikes and surges” in places, but insisted they will soon be gone and that a vaccine “is coming—it’s ready,” and its delivery is imminent.

“It’s going to be announced within weeks. And it’s going to be delivered. We have Operation Warp Speed, which is the military is going to distribute the vaccine,” Trump said, referring to the administration’s program to fund the manufacturing of COVID-19 vaccine and therapeutic candidates ahead of time, in case they’re approved by the Food and Drug Administration (FDA).

“More and more people are getting better,” Trump said. “This is a worldwide problem, but I’ve been congratulated by the heads of many countries on what we’ve been able to do. If you take a look at what we’ve done in terms of goggles and masks and gowns and everything else, and, in particular, ventilators—we’re now making ventilators all over the world, thousands and thousands a month, distributing them all over the world.

Although a number of COVID-19 vaccines are being developed, none have yet been approved for use in the United States. AstraZeneca has resumed the U.S. trial of its experimental COVID-19 vaccine, and Johnson & Johnson is preparing to resume its trial, both following pauses because of potential safety concerns.

AstraZeneca, one of the leading vaccine developers, paused its U.S. trial on Sept. 6 after a report of a serious neurological illness, believed to be transverse myelitis, in a participant in the company’s UK trial. J&J paused its large, late-stage trial last week after a study participant became ill.

Both companies have contracts to provide vaccines to the United States and other governments if they are cleared by regulators.

AstraZeneca said that it isn’t unusual for some trial participants to fall ill during large-scale vaccine trials but that the U.S. FDA has reviewed all safety data from the trials globally and deemed it safe to continue testing the vaccine.